Today I was the Granny-Nanny for my adorable grandson, Dylan. 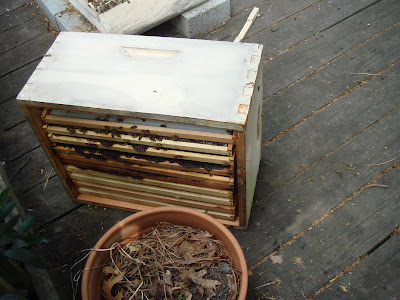 Unlike the Granny in the NY Times article, my grandson lives in Atlanta and spends every Friday at my house. It's the most fulfilling part of my week.

He was at my house today and he loves to stand at the sunporch door and look out through the door to the bees. While he and I were standing there, I thought about a post on Beemaster from Robo, one of the members, who had gone home and found a deep box that he had left near his hives, filled with a swarm.

You may remember that I found Bermuda to be a very weak hive at the beginning of the bee season this year. I moved the medium box in which the four or five frames of bees left in the hive were living onto the hive stand and took off the deep box. Like most things with the bees, when you change any configuration, some of the bees are reluctant to leave the original. So I had left the deep standing on its side with the frames vertical, diagonally facing Bermuda.

Remembering Robo's post I thought, "I ought to move that deep and set it upright and maybe I'll get a swarm like he did." So I left Dylan watching through the door and went onto the deck and picked up the deep and carried it about six feet across from its current location and set it down. 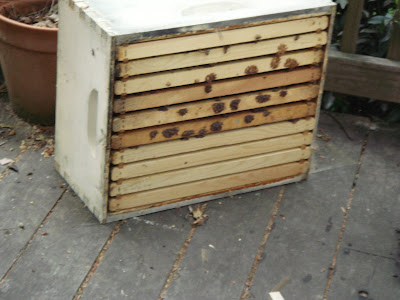 It dawned on me that the deep felt kind of heavy for an empty box. I looked down and the box was at least half full of bees! Unbeknownst to me, a swarm had moved in - either one of my hives had swarmed or they appeared from somewhere else! I looked over where the hive box had been and bees were circling looking for their deep box. Oh, dear, I thought in panic, and picked the box back up, took it back to its original location and set it back on its side.

I went back into the house and looked with Dylan through the door and realized that I had set the box on yet another side so the frames were now stacking on each other, probably killing bees and maybe injuring the queen. You can see the fallen stack in the first picture. I couldn't suit up or light the smoker or even go back to the bees until Dylan left around 5 PM. I wish I approached situations like this in a calmer fashion because I could make less mistakes if I weren't so distressed when something like this happens.

When Dylan left, I suited up and went out with the plan of putting the box to rights and setting it on an extra hive stand that I had. When I arrived at the box, the bees were "balling the queen" - you can see the bunch of bees in the lower right of the third picture. 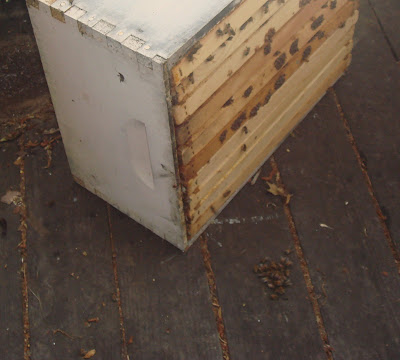 I took my bee brush and brushed the "ball" onto a plastic sheet. Most of the bees left and the four who remained looked like three workers and the queen. I held the plastic over the hive box and I hope all of them returned to the box. Otherwise this will be a queenless hive.

I set the hive box upright, put it on a bottom board, and a hive stand and covered the top with a plastic bottom board as the rain began to fall in Atlanta.

I left and went to Lowe's where I bought a 2' X 2' square board and when I returned, I put this on top of the hive with a flower pot weighing it down.

Immediately I ordered another screened bottom board, and two hive covers (see, I'm an optimist!)

Email ThisBlogThis!Share to TwitterShare to FacebookShare to Pinterest
at 9:43 PM
Labels: balling the queen, small swarm