Dilemma of the Possibly Queenless Swarm 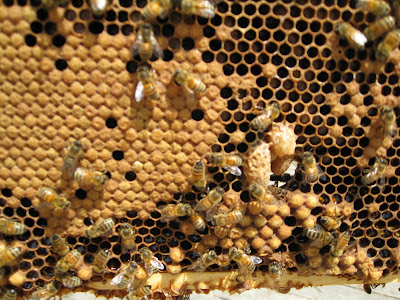 When you get a small swarm, it sometimes is an after swarm. When a hive swarms, about half the hive leaves and the queen goes with the swarm. They leave behind enough bees to keep the hive going and either a virgin queen or a queen about to emerge. Sometimes in a large hive, there are several after swarms, each containing a virgin queen.

When I got the small swarm on Tuesday the 8th, the bees in the box put their rear ends up in the air to signal the rest of the bees that the queen momma was in the box. However, she may not have made the box journey well or she may have been injured in the transfer from cardboard box to hive body.

I opened the small swarm on Friday and there was no sign of laying. The workers were drawing out comb, but syrup was being stored and no eggs were anywhere. This could mean the queen is a virgin queen and won't be laying for a while since she will have to make her mating flight and return safely to the hive.

One way to deal with this is to put a frame of brood and eggs from another hive into this hive. If they need a queen, they can then make one from the eggs. If there is a queen, they won't need to use the eggs to make a queen and the brood that emerges from the borrowed frame will simply enhance the hive.

I chose this frame because of the queen cell, but I don't know if it were a good idea or not. My thought was that if the hive were queenless, they would gain time on getting a new queen because this one would emerge soon. However if there is a queen in the hive, I guess I wasted a perfectly good queen cell. Anyway, I don't know what the answer was to this problem. If I had it to do again, I'd probably only add a frame with brood and eggs.