Two Swarms in One Day 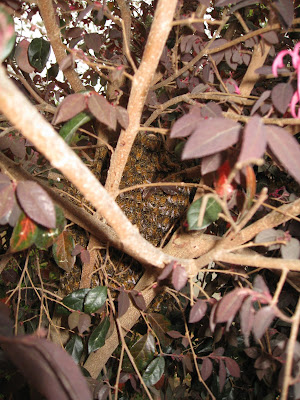 Last night on my email for this blog, a man who lives near my house wrote me that he had a small swarm in a bush at his house. I decided to go and get it in spite of the fact that Cindy Bee had also called me to get another swarm this morning - talk about biting off more than one can chew! Here are pictures of Mike's swarm which was located in this beautiful shrub at the front corner of his yard. 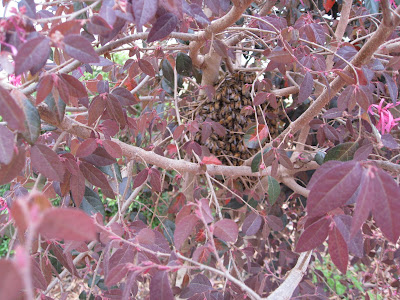 The bees were not in a position either for me to cut the branch on which they
gathered nor were they on a branch that could be shaken. I put the sheet under the box and used my yellow bee brush to push the bees down into the box, hoping that the queen would be in the first brush's worth of bees. 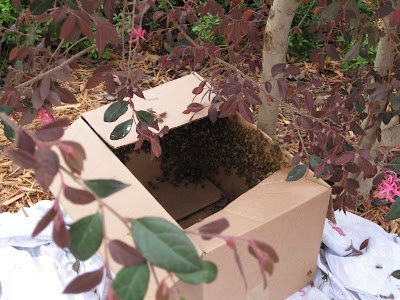 Sure enough, the bees quickly moved into the box to join the queen and began the nasonov signal to any left out bees. I had the whole swarm in the box within about 25 minutes. I finished just as the garbage truck drove by, pausing to collect the trash without giving me in my space outfit a second glance! 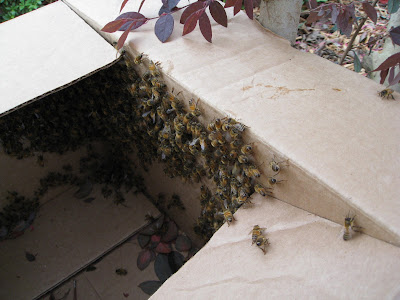 Email ThisBlogThis!Share to TwitterShare to FacebookShare to Pinterest
at 10:13 PM
Labels: nasonov, swarm