The Downfall of Devorah - Beekeeper Error

Yesterday I opened the "bees who found me" nuc to see what was going on. I saw the queen who had a worn yellow spot on her back. This observation told me that the downfall of Devorah was all my fault.

My theory is that I put that queen into a hive that actually had a queen who had stopped laying because of the dearth and the drought in Georgia.

Immediately the hive was disturbed - here's a new queen and they have an old one, so the new queen had to be done away with and they did so. This of course disturbed the hive. Then with the disturbance and whatever battle went on in the process, the hive was weakened and then robbed out by my other hives.

The original queen with the yellow spot absconded with some workers and they landed in my neighbor's yard. As you know from previous posts, they ended up in my yard, ensconced in this nuc.

The nuc has had its share of troubles. Because I was feeding with a Boardman, the the Boardman was robbed out yesterday. The bees remain however, and I saw the queen, so they are still trucking along. The interior of the hive does not appear to have been robbed - no jagged wax edges, etc.

I have changed their feeding to a ziploc baggie and have posted on Beemaster to see if I need to get some pollen substitute for them as well. We don't have terrribly cold winters in Atlanta, so I'm hoping this little group can make it through the winter if I keep feeding them. I also wonder if I should add a frame of workers from my strongest hive to this nuc. 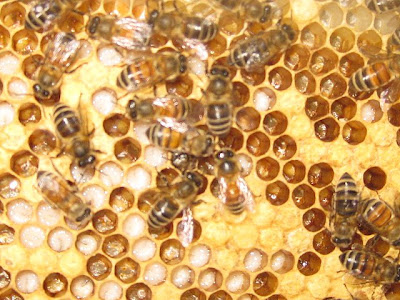 In the photo below, although it looks like a spotty pattern, in fact the uncapped cells all have eggs or larvae in them. 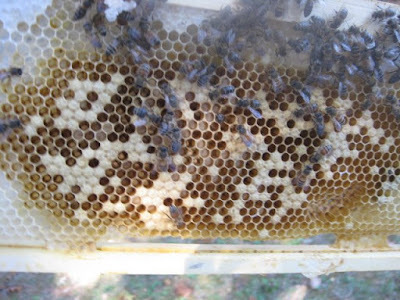 Email ThisBlogThis!Share to TwitterShare to FacebookShare to Pinterest
at 7:25 AM
Labels: queenless, robber bees


Blog Visitors from All Over the World