The goal was to acquaint the gardeners with what goes on in the hive, since their gardens benefit from our bees and vice versa. Since the Blue Heron participants this year were already beekeepers, they were not unfamiliar with beehives! Maybe we can get a better response next year.

I opened Julia's hive first which has a new queen from the Purvis Brothers apiary. She was laying beautiful patterns. We didn't see her, but this is the first time this hive has looked so good since we started the Blue Heron hives. There was an empty super on the top of the hive, so I took it off for Julia. But this hive is going to go into winter well.

The other two hives of mine are not doing very well. The first hive seems to have a drone-laying queen. There was very little honey in the hive and lots of drone brood. There's not a good reason for the bees to be making drones so close to when they kick all the drones out unless the queen is "short-bred," as Keith Fielder described it in a talk to our bee club. The other hive is only one deep box. They have two good frames of honey, lots of pollen, very few bees. We saw the queen but her pattern is scanty and not impressive.

One thought I have is to combine the two hives, throw out both queens and put in a purchased replacement. I wrote Don K at Dixie Bee Supply to see if he has any queens and I'll call the Purvis Brothers on Monday. Maybe I can find a queen and drive up to get her. Either beekeeper is within 1 1/2 hours drive from me.

We opened Kevin and Peter's hive (I finally could take pictures - while I worked on the other three, I didn't get a chance). Their hive which is a new start with a new queen this year, was doing beautifully. As I wrote about in a post on how to do a hive inspection, they removed the second frame as the first frame out to lessen the squashing of bees when putting frames back in the box. 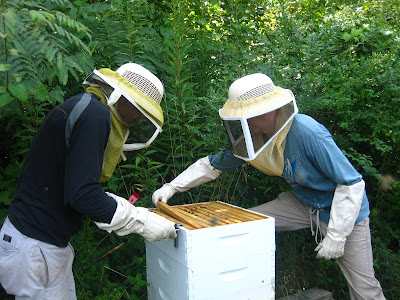 There was brood in the honey super (an argument for same-sized frames), but it does mean their queen is really productive. Their queen was laying a lovely football shaped pattern just as one would wish in a good hive. 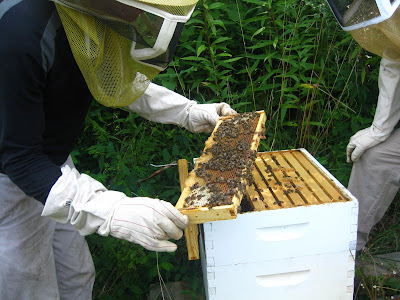 See how well covered with brood this frame is? 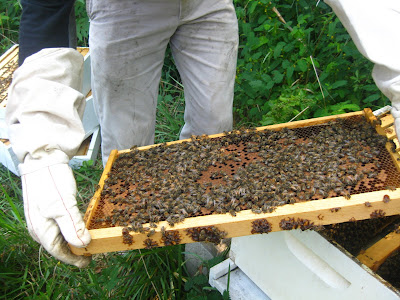 We all conferred and decided that since they had a super on the hive which was mostly filled with honey and another super with what looked like two or three frames of honey, that they should get the honey out and only have one honey super on the hive. The guys pulled the empty frames from the super and replaced the empty slots with the full frames from the almost empty super, leaving the hive with one full super of honey. 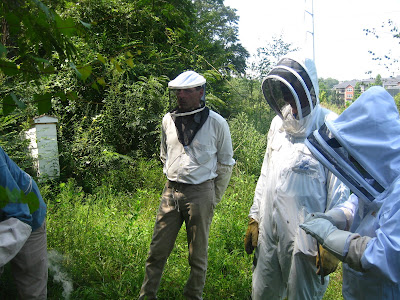 We were all surprised to find that in none of these hives did there seem to be a small hive beetle problem. We only saw one or two in each hive. The weakest hive had about six that we saw.

I brought a jar of honey from my hives for the participants to taste. Then since the bee tree is only about 1 mile up Roswell Road from Blue Heron, I offered to show it to them.

The three beekeepers from Metro drove the mile and were amazed at the bee tree with the hive box on the top, as am I every time I see it! The bees in just two days had used up the baggie of sugar syrup, so I replaced it. I can't believe they went through it so fast. I can't return to replace it again until Tuesday. I hope they'll be OK until then.