It's hot and the bees are bearding. My Aristaeus2 hive I think is half its size. About a week ago outside at 8 PM there were thousands of bees swirling around. I thought robbing was going on and responded accordingly. Now I think that half of Aristaeus2 swarmed, or at this time of year, I guess they absconded.

To help bees who were left behind, I put a baggie feeder of sugar syrup in and closed the top of the hive. They have honey and were even making new honey but I don't know why the hive absconded, so I thought it would be best to take care of those who are left. There is a laying queen. I saw eggs after the swarming/absconding event. But without the ventilation of the propped top, even this small hive is bearding. 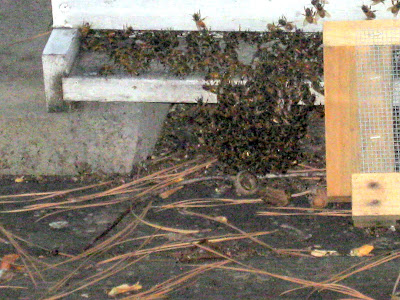 Bermuda, my four year old hive, is really bearding. All the girls are out. I just checked and they are still out in the summer night at 9:30 PM. The beard, if anything, is even larger than it was before at 7 when I took this picture. 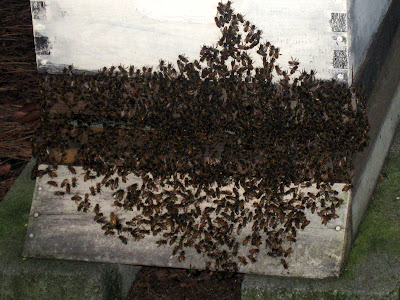 Mellona has never bearded. It is a hive full of bees, but this is about as big as her beard gets. Given that it is August in Hotlanta, that is quite an accomplishment.

All of my hives have screened bottom boards, slatted racks and I keep the top propped in the summer - but still it's too hot for all the bees to spend the night indoors. So they lounge and dance (washboard) on the front porch late into the night. 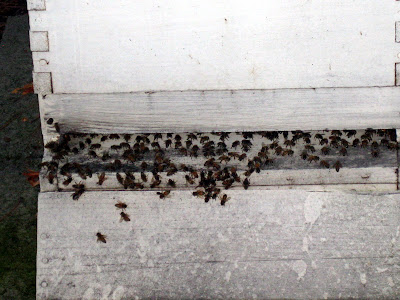