The nuc I created with the combination at Blue Heron appears to be doing fine. I didn't open up the bottom box today, but I did look down into it to see so many eager little bee faces. The five frames in the box are fully built out and mostly used. There are three brood frames (one with some pollen) and two solid honey frames. Only one of the brood frames has much space in it, so first I gave the nuc hive a medium box to move on up into. 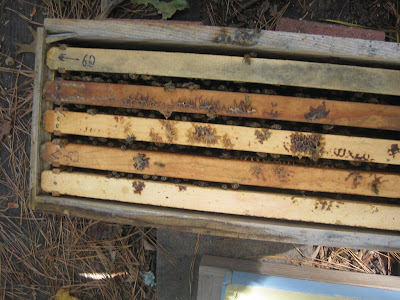 Then I wanted to feed them since it's only a short time until winter and they are weak and small. So I put a third medium nuc box on top of the hive body and put a ziploc baggie feeder on the tops of the frames beneath. Because it is a quart instead of a gallon bag, I'll need to check on it more frequently. 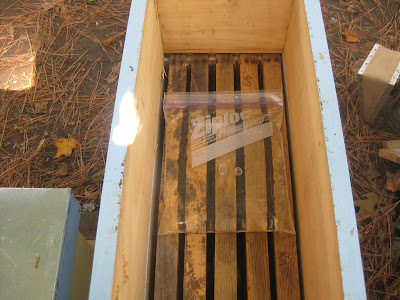 So here's their new "deluxe apartment in the sky..." Doesn't it look like a row house!

But I think the girls may have the capacity to fill the second medium box before winter hits. Several beekeepers I respect keep bees in nucs through the winter in much colder climates than here in Hotlanta - Michael Bush in Nebraska, Ross Conrad in Vermont. So I am having hope for the future, especially if the new queen emerges and gets well-mated. 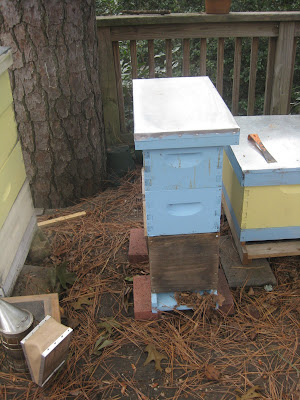 The only problem is that the nuc box on the bottom is poorly built and a little warped. I didn't match up the sides well and it's uneven on the top, so the bees are using the space between the bottom box and the first blue medium box as a middle entrance. 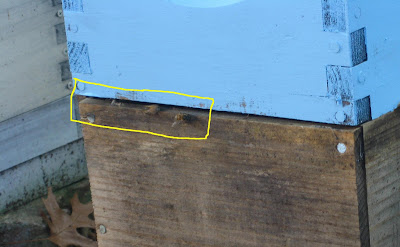