Beyond Frustrated with my Top Bar Hive

I enjoy and admire Sam Comfort and am so pleased to have met and heard Wyatt Mangum speak, but neither of them addressed the problems I am having at Topsy. I don't know if it's how I constructed the hive, its location in Atlanta or what, but I hate inspecting it.

It's always one problem after another. After nearly destroying the hive to correct the cross comb problem, I visited it today to see if the queen were still alive and laying.

I opened Bar 11 and immediately found cross comb. GRRRRRR. I cut it out, it fell to the bottom of the hive and frustrated by the inability to come up with any way to repair what I would have rubber banded into a Langstroth hive's frame, I pushed it down to the unused part of the hive next to the follower board. 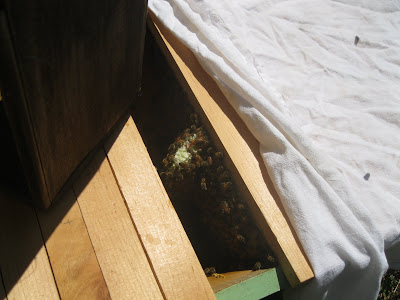 Innocent bees peering up at me, the helpless beekeeper. 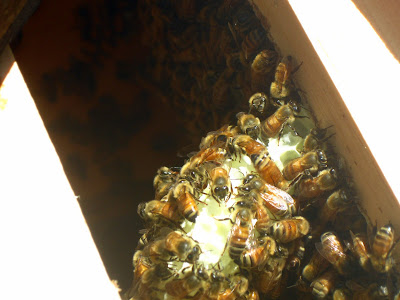 I then moved to bar 10 which looked OK, but when I tried to lift Bar 9 there was resistance and it broke off of the top bar, leaving a gaping opening and honey dripping.

Is the queen there and laying? I certainly don't have any idea because I wasn't willing to destroy any more comb to find out.

What is a top bar beekeeper to do in these instances?

My understanding of the top bar is that there is great advantage in only removing one bar at a time rather than lifting out a whole box. But the HUGE disadvantage of this system is that the beekeeper has no idea what is going on until damage has already happened.

I just closed the hive up, took off my veil and walked away.

I may leave it for the rest of the summer.

I hope they enjoy the honey they make. I certainly will not.

There is no way to harvest honey out of a top bar without killing a bunch of the bees and I'm not willing to do that. There's no way to monitor the hive because the top bars keep pulling off of the comb.

I wish there were some way to move this hive into a Langstroth box because this is beyond me.