Rabun County is literally a month behind Atlanta only a couple of hours to the south.  In Atlanta, we've been able to plant spring plants since the middle of March.  In Rabun county only now is it warm enough to plant anything.

I last checked the Rabun hives on Friday the 13th.  It is only a week later, but I had to come to Young Harris to a conference (a psychology conference - the bee institute is in May) so I stopped by again today.  I won't be back up here until the Bee Institute at Young Harris on May 10, so I wanted to make sure the hives had plenty of room as it is now the nectar flow should begin up here. 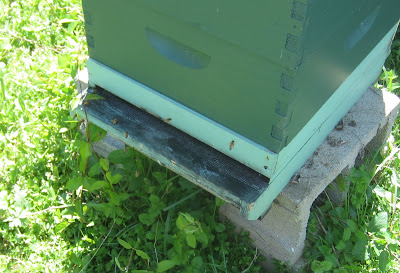 The queen was laying eggs and you can see c-shaped larvae in these cells. 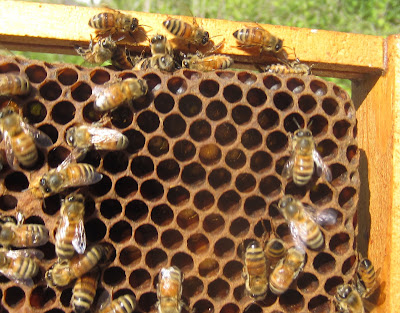 I saw two bees like the one in the lower center who were completely covered in yellow pollen! 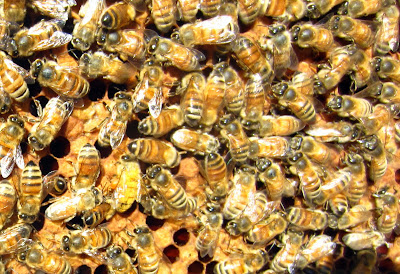 The lovely frame below is one I had stuck in on the side of the box with remnants of old comb.  The bees had incorporated the black comb into new fresh wax in the center! 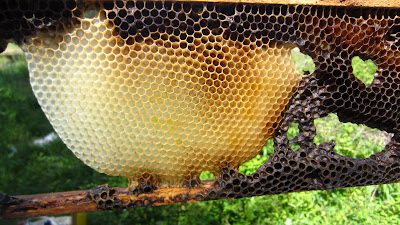 In the blue hive on the 13th the bees were building wax and festooning. 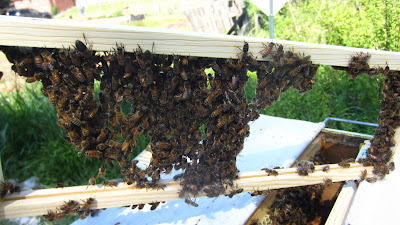 Grass was growing up in front of the hive making access a little difficult, so I took a piece of cardboard and tamped the grass down with it. 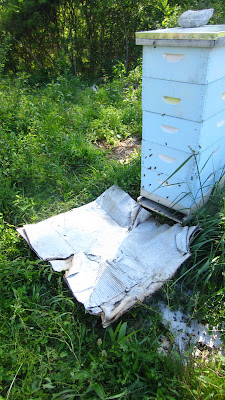 Today on the 20th, the bees were making use of the cardboard as a place to drag out the dead.  Actually they do that anyway, just without the cardboard, the dead get lost in the grass. 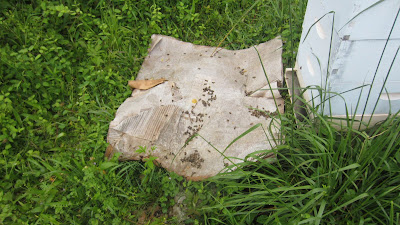 Inside the hive, the bees hadn't used much new real estate.  I had brought a new box with me and although I didn't put the box on the hive, I took a full frame out of it and gave them a better ladder in their latest empty box.  I didn't put any new box on the green hive either because they are only in half of the second box. 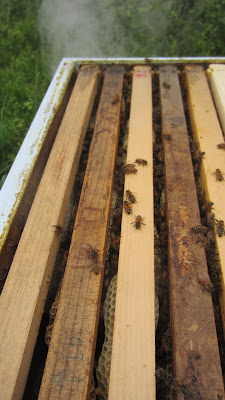 Also in the blue hive, I saw the opened queen cell in the photo below, indicating that the hive had probably swarmed and requeened itself.  The queen is laying so maybe I missed this the last time I was here. 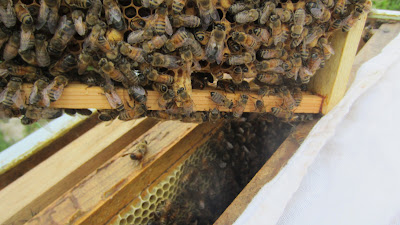 I'm trying to keep up with my hive boxes this year so before I left, I numbered these boxes.  I now have numbers on all of my 8 frame mediums that are currently on hives.  I also have some numbers on the boxes that are stored, not yet used at my house and at Jeff's.

This way I can keep up with where honey comes from (that is to say, which hive produces the honey) and also make an effort to return harvested boxes back to the hive from which they came in an effort to keep the hives healthier. 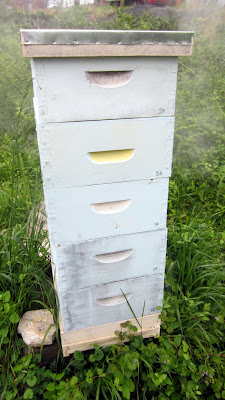