Inviting Bees into a New Super of Foundationless Frames

This morning I visited the Morningside Community Garden hives to see how they are doing and to determine if either hive needed a new box.  I only had about 20 minutes so it helps to know the purpose of the inspection.  Once I've gotten my question answered, I can shut the hive up and go on to work.

However Hive 2 was a different story.  They had built out seven of the eight frames in their second box so it was time to add a third box.  The photo below is of frame seven.  It isn't completely built out but I still want to add the box. 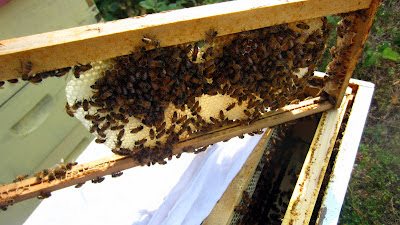 In a tree the bees build down.  I want to put the new box beneath the current ongoing second box.  To invite the bees into the super, I need to create a ladder of drawn honeycomb for them to traverse between the two boxes.  This will encourage them to build in the new box two which will contain six empty frames and two filled frames serving as the ladder.

I removed two empty frames from the new box to make space for the ladder frames. 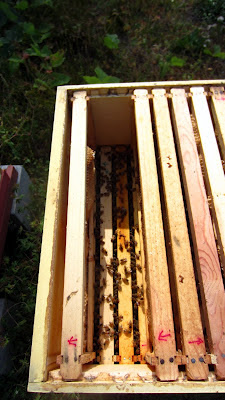 In box two, I removed two frames of brood and eggs - in the same position as the two empty frames from the new box. 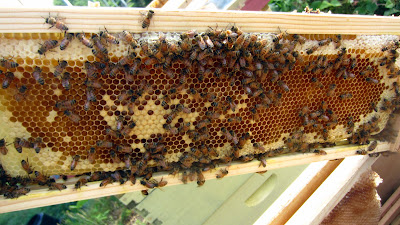 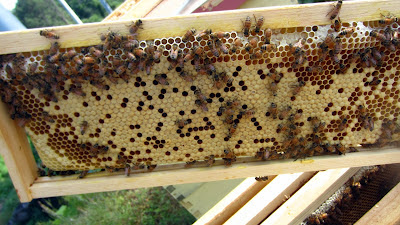 I put the two brood frames in positions 2 and 3 in the new second box.  It helps that they are brood frames because the bees will come into the box to keep the brood warm and fed.  You can use honey combs for the ladder, but brood combs are more inviting for the bees.

Below you can see the brood frames moved into position 2 and 3 in the new box. 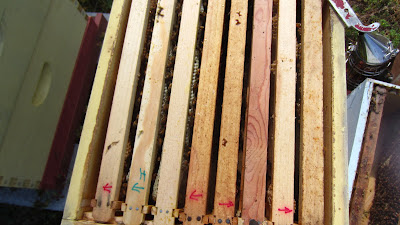 In box two I pushed the frame in the number 1 position against frame 4 (making it now in position 3) and put the two empty frames in positions 1 and 2. 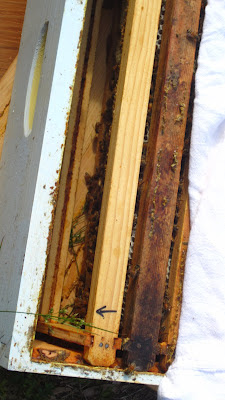 Now the box is all put back together.  The box with the "6" stenciled on it is the new empty box with the ladder in positions 2 and 3.  The box above it is the old second box (now box three), full except for the frames in positions 1 and 2 which are foundationless frames, waiting to be filled by the bees. 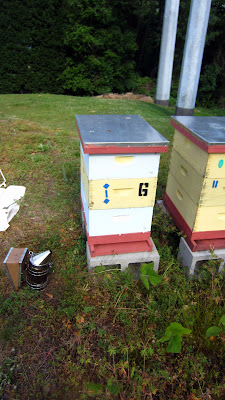