Michael Bush, Man of Many Talents

I arrived in Rabun County on Friday night in a torrent of rain.  I had promised the dogs a walk when we got there, but with the rain, I went to the grocery store and got gas for my car instead.  When I was done with those errands, the rain had stopped, so I decided at 8 PM to go ahead and walk the dogs around Black Rock Mountain lake.

I was the only person there, so I let Hannah, my bearded collie/terrier mix, off leash and we walked the path around the lake.  It was misting but there was still plenty of light.  Hannah bounded down the trail up and back, having a great time.  On the back side of the lake, as I neared the final bridge, I heard crashing in the woods and immediately thought, "Bear!"

Sure enough, a few steps down the trail and I found a bear about 10 feet up a tree with Hannah at the foot of the tree, just looking at the young black bear.  Of course I didn't have my camera.

The tree was only about 12 feet from the trail and as I arrived, the bear was looking at me and then at Hannah.  I called Hannah who finally turned away from the bear.  Just as she did so, the bear leaped off of the tree and ran up Black Rock Mountain!  What an adventure!

On Saturday I drove to Asheville for the the conference exploring natural beekeeping put on by the Center for Honey Bee Research in Asheville.  The three speakers were very different and all were interesting.

From Ed Levi's talk about his world wide beekeeping, I saw interesting photos of bees around the world.  He also spoke on IPM and beekeeping.   Roger Simonds, who is an investigator at the USDA lab in Gastonia, NC, spoke on all of the poisons that end up mostly in wax and the pesticides that end up in honey - his picture of honey health and particularly of wax health, grew grimmer and grimmer the longer he spoke!

Michael Bush gave both of the talks I had heard in Massachusetts, but it's always fun to hear his perspective and I had fun just chatting with him as well.  At lunch he played and sang with his 12 string guitar - who knew? 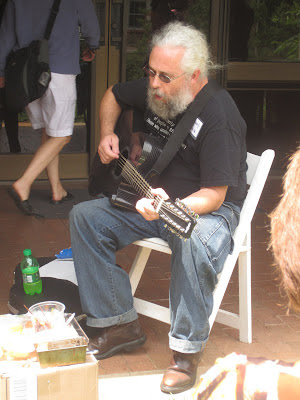 The Bunscombe County Beekeepers were quite hospitable, sharing watermelon, fresh pineapple, and home-grown cherry tomatoes with all of us as we listened to Michael play and sing. 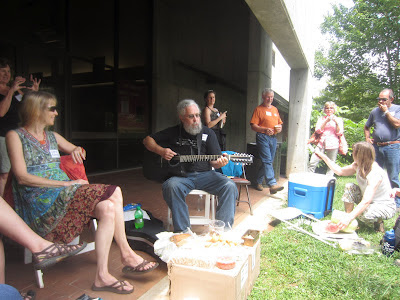 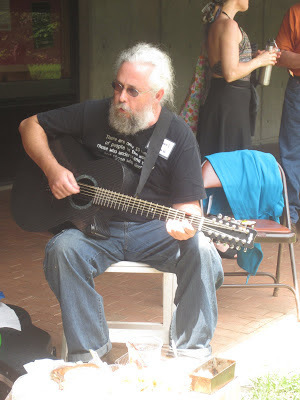 It was a great day! And a great weekend in the mountains.