One advantage of going to EAS is the opportunity to rub elbows with well-known beekeepers. I learned from each of these men pictured below during my week at EAS.

Billy Davis is from Virginia and is a well-established beekeeper. I went to a talk he gave on making nucs. I learned so much from him about beekeeping in general in addition to what he shared about making nucs.

For example, he uses hive drapes when he inspects the beehives and this cuts down on robbing. He said it was foolish for a beekeeper to lean a frame against a hive, uncovered. It's an invitation to robbers.  I came home inspired to use a hive drape going forward.  I have some old quilts that aren't good quilts but are sort of ragged.  I may cut sections from these quilts and make dowel casings so that they can become manipulation cloths for inspections. 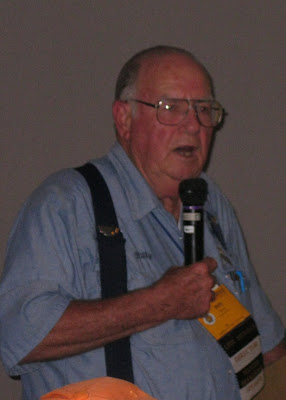 Learning about the bees through managing nucs helps you manage colonies. He advocates using powdered sugar every other week in the middle of the day when the foragers are away from the hive.

And he had fun at the Brushy Mountain BBQ (see below!) The next well-known beekeeper I was privileged to hear was Clarence Collison. When I was studying for the Young Harris Master Beekeeper exam, I studied every page of his book, What Do You Know? He has written a column in Bee Culture for years titled "What do you know?" and challenges beekeepers to stretch their knowledge about every aspect of beekeeping.

His talk was on pheromones. Most of what he talked about was material I had already studied in his book for the exam I took in May. One interesting thing he said that I didn't know was that if you removed the mandibular glands in the queen, she still would produce queen substance from the tergite gland on her abdomen. 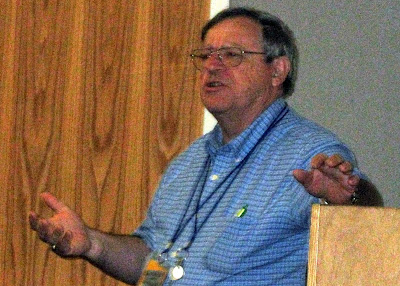 He had fun at the BBQ as well and I took the opportunity to thank him for all I learned from his book to prepare for the exam. 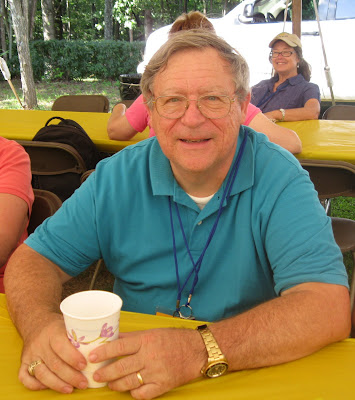 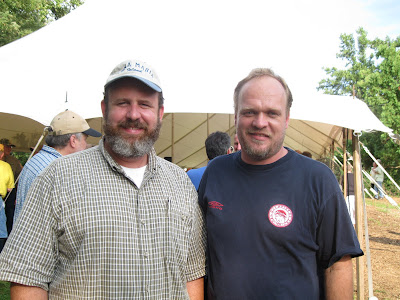 In this picture on the right in navy blue is Dennis van Englesdorp.  Dennis is one of the foremost researchers in what's happening to bees today.  In his talk he said that if you had a hive with a "queen event" during a 50 day period,  then that hive had a 2.71 higher chance of dying than a hive that didn't have a "queen event" in the same 50 days.  A "queen event" means the hive was queenless, made an emergency queen, lost their queen or was requeened, for example, during that period of time.

My friend Phillip, standing with Dennis, and I asked Dennis to explain more about that to clarify it for us.  Dennis was accessible and friendly and gladly talked to us about our concerns.  I had misunderstood what he said and thought he meant that if a hive had a queen event, it was more likely to die.

So I feel very lucky to have rubbed elbows with these particular three beekeepers during the week of EAS.  I also met Wyatt Mangum, writer for ABJ and keeper of top bar hives, but I have so much to write about what I learned from him that I am saving it for another post!

Email ThisBlogThis!Share to TwitterShare to FacebookShare to Pinterest
at 12:19 AM
Labels: adding frame to queenless hive, hive drape, medium nuc