Moving the Bees from the nucs to the hives 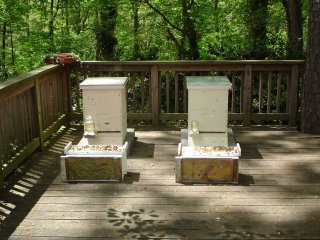 April 16, 2006: On Easter afternoon I moved the bees from the nucs to the hives. I was not scared of being stung but was scared of dropping one of the frames or of killing the queen. I didn’t think I saw any queen cells but was also afraid of destroying anything I saw on the frames. I moved the frames into each of the two hive bodies, filled out the bodies with frames and then put the second hive body and frames on the top.

I made several calls to find out what to do with the bees who didn't want to leave the nuc - see pictures.....and learned to set the nuc on its side in front of the hive so the bees could make their own way to the queen inside (hopefully, since I never saw her)

Beekeepers will notice that I made the mistake of putting the second hive body on top when I installed the bees - OOPS! 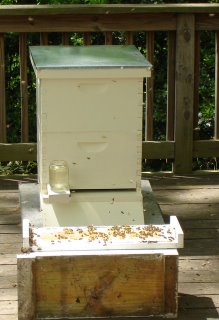 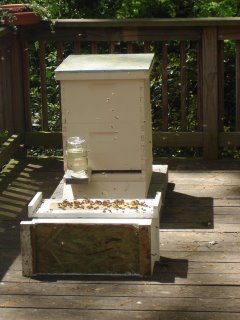 Email ThisBlogThis!Share to TwitterShare to FacebookShare to Pinterest
at 2:57 PM
Labels: nuc, transfer of bees