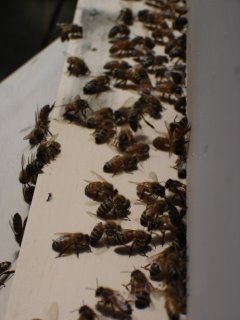 . I went outside to find a bee struggling to pull another bee out of the hive. She would pull and the bee would disappear back into the hive.

On her fourth try, she pulled the bee out of the hive and flew off carrying her. The bee she was carrying was dead and it was her job to carry out the body. She flew about five feet and left the body on the deck.

She was a mortician bee, I guess.

The bees have a specific job progression from birth. At first they remain in the hive to clean up, groom the queen, take care of larvae, make wax and honey.

Then they hang out at the entry to the hive, fanning the entry way either to cool the hive or to help solidify wax cappings over the brood or the honey.

These pictures are of bees hanging out at the hive. I think the Conga line of bees at the entry to Destin in the third picture is rather funny.

The last job in a bee's life is the work of foraging. Many of the bees in these pictures are at that stage. They communicate to each other where to find the nectar and pollen and then they fly off. They've developed the strength for this during the time that they were fanning at the entry to the hive. These foragers in the summer live about three weeks before they die and get carried out by a mortician bee.

As Winnie the Pooh said, "You never can tell with bees." 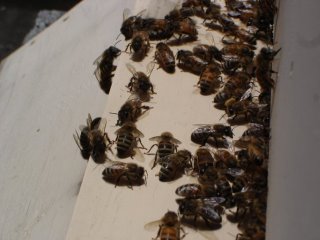 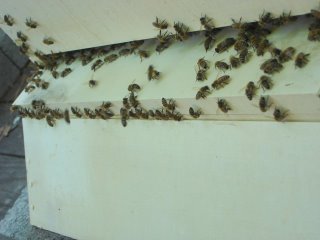 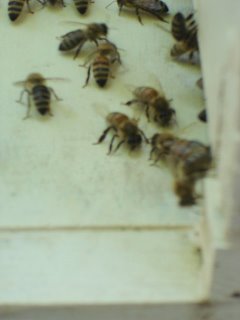