I've set up a bee/bird bath on my deck near the hives. The brick piece in the center is so the bees have something to stand on while they drink - as Jamie Ellis, bee expert from the University of Georgia says, "Bees can't swim 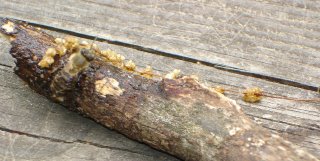 ." Yesterday there were extrememly high winds in Atlanta and I found two bees floating in the bee bath. Both were still moving and still alive. I scooped them out with the stick in the picture. One flew off right away. The other is still on the stick at the left end, drying off. I left her there and about 30 minutes later, she had flown off.

This morning there were two shallow pools of water at the landing area in front of my Destin hive. Two bees were lying there in the water. One was dead. The other I scooped up with a cloth napkin and put her on top of the hive. A few minutes later she flew off. 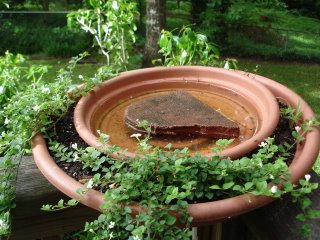 Here's a picture of the bee/bird bath. Squirrels, birds and bees love it. The idea came from Birds and Blooms - it's two plant saucers. The one on the outside I keep planted with something that will hang down. The inner one obviously is the bath.

Email ThisBlogThis!Share to TwitterShare to FacebookShare to Pinterest
at 9:57 AM
Labels: Jamie Ellis, water source