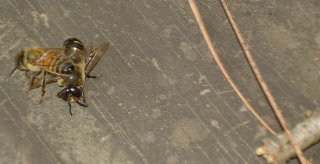 The little orange bee has the job of carrying out this dead bee - I think the dead bee may be a drone because he is big and because of the way his eyes look. I followed this little worker bee and took ten pictures of what was happening but because she moved so fast with her grim job, this was the only one in focus (and in it, she's almost out of the picture!)

She moved him away from the hive and finally dropped him over the edge of the deck to fall into the bushes below.

Email ThisBlogThis!Share to TwitterShare to FacebookShare to Pinterest
at 10:08 AM
Labels: mortician bee