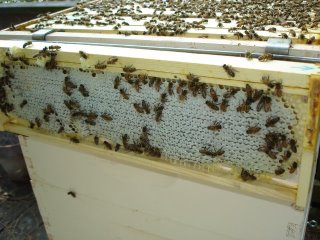 Both hives were doing well. Bermuda had two honey supers filled and capped. I put a third super on Bermuda between the brood area and the other two honey supers. Bees build down when they work in the hive and placing it there may encourage them to draw it out and fill it with honey.

Destin had gorgeous fully capped honey in the top super and the second honey super had barely been touched. The foundation pieces looked almost just like they did when I put them in the hive.

I moved the almost empty super and put it below the filled one. 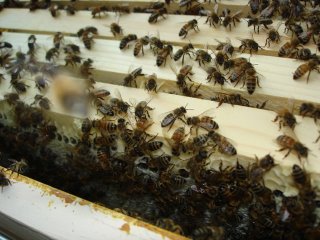 This may stimulate them to work on it, but with no rain in Atlanta, bee times are hard.

I also moved the filled super because they are putting brood - mostly drone comb - in the bottom of the frames on one side of the honey super. With those frames separated from the brood chamber, the brood already there should hatch and the bees should then fill that comb with honey rather than brood. We'll see. 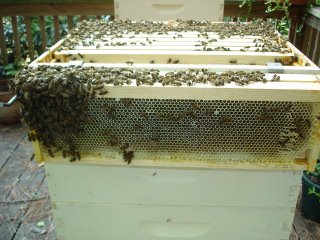 The very outside frame in Destin was the only one where the honey was not capped, as you can see in this picture.

Email ThisBlogThis!Share to TwitterShare to FacebookShare to Pinterest
at 11:34 AM
Labels: capped honey, hive inspection