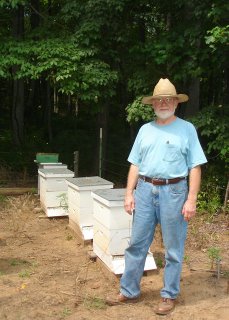 I'm in North Georgia for the July 4th week. While here I went to visit my new friend Ed to see his bees. Ed has four beehives in North Carolina just over the Georgia line. His hives are in a beeyard protected from bears by an electric fence with a solar powered battery. He shares his beeyard with about 30 hives belonging to Bob Binnie, a well-known N Georgia beekeeper from Lakemont, Georgia.

Bob unexpectedly arrived at Ed's house just before I did so I was lucky to get a free lesson about bees from someone who really knows his bees. Bob is one of the speakers at 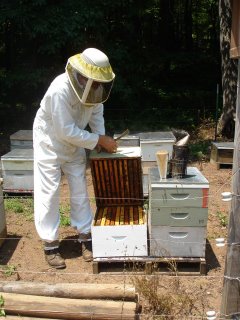 EAS(Eastern Apiculture Society) in Young Harris, Georgia in August this year. His topic is "Breaking in to New Markets." Bob sells his honey all over this area.

Ed and Bob wait until the sourwood is in bloom to put honey supers on their hives. I wondered why the bees didn't swarm if they had to wait this long before getting space to expand. Bob (in my wonderful private bee lesson) explained that the hives at Ed's place were mostly new splits, started in May, so in fact were just now at production strength.

I have to confess that I have never seen the queen in either of my hives or in any hive. Bob showed me the queen in one of the hives and I was thrilled to see her. He also showed me a queen cell and many examples from Ed's hives of great brood patterns.

I also learned from Bob how he lights his smoker. Everyone seems to have a different trick. Bob's (and as a result Ed does this too) is to use a paper towel. He fills the smoker with thick twine and a paper towel and then lights the towel. Unlike mine, which I can spend a minimum of 15 minutes trying to light, his went up in thick smoke right away. He keeps it running with pellets he gets from Dadant.

So for smokers so far:
--Virginia Webb uses wood chips and puts some in the bottom, lights them and keeps feeding the chips.
--My friend and mentor, Nickie, in Atlanta uses hamster cedar chips and pine needles
--Bob Binnie and Ed use paper towels to start the action and then feed Dadant pellets
--I, who take forever to get mine lit, use dryer lint, cedar chips and anything I can find that will burn......hmmm, I think it will be paper towels for me going forward!

It was certainly a privilege to see Bob in action. I asked him about his hives in the Rabun Gap area where my house is and it happens that he supplies the observation hive bees at Osage produce market where I buy local produce daily when I am up here. His hives line the highway beside Osage as well. After my afternoon at Ed's, I went back to Osage and found the queen in Bob's observation hive there!

When I was a little girl, we had a housekeeper who would also say, "We live and learn and dies and forgets it all." Goodness, I hope I remember all I observed while watching Bob. 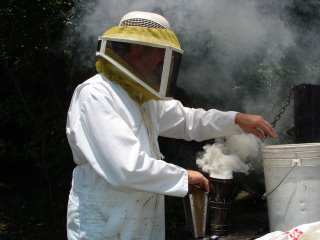