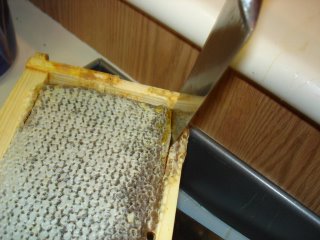 Chunk honey is often called comb-in honey. Chunk honey includes a chunk or chunks of honeycomb in a jar with honey filling the jar.

I had a frame of beautiful comb from Destin, so I decided to cut chunk honey from it. I cut chunks from 5 1/2 frames of the 10 and crushed the other 4 1/2 frames to make the honey to fill the jars around the comb.

I used a sharp knife to cut a chunk of comb the size of the frame and the width of a wide mouthed canning jar. I balanced the frame over the wonderful 12X17 Calphalon pan I bought at my local Super Target. I held a spatula under the frame as I made my last cut to catch the chunk. 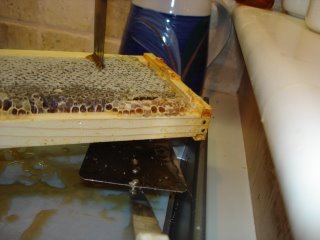 I then transferred the chunk to the wide-mouthed jar. Each jar held 2 chunks. Each frame yielded four jars and a small chunk to be included in the crushed and strained honey at the end of the process.

When I was done I had filled 22 wide mouthed jars. I crushed the rest of the honey into a strainer over a 5 gallon bucket, covered it with the top, and put it out on my front sidewalk near my garden. The heat of the day should make the honey run through the strainer so that I can finish filling the jars before the day ends. 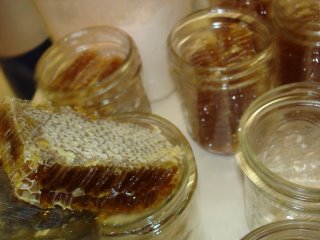 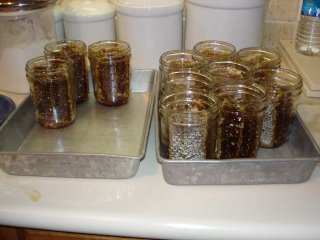