I've been out of town since Thursday, so I didn't get to do a hive inspection this past weekend. My plane got back into Atlanta in time for me to inspect the hives quickly before I left for two appointments at my office at the end of the day. Amazing to see what I found!

Proteus and Mellona have had starter strips for two weeks at this point. In both hives the empty frames had been built out and they were working on the 10th frame in each hive. Below is the frame from Mellona closest to the center four nuc frames. You can see that it has been built out all the way to the bottom. 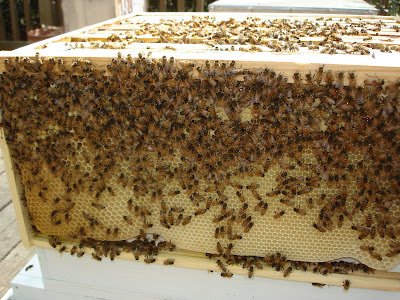 Here are three of the starter strip frames from Mellona. They are hanging on the hive in the way they are in the hive box. In other words, the frame closest to the camera is the 10th frame. The second comb layer is the second from the edge and the third comb layer (almost to the frame bottom) is next to one of the frames from the originating nuc. Such beautiful comb they are building! 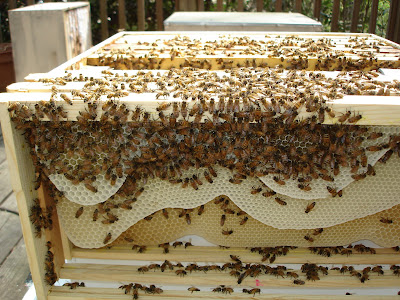 This frame below is from Proteus, my strongest hive. Proteus was calmer today. No hive seemed particularly upset with my intrusion today, as a matter of fact. Maybe they are waiting for me to notice how well they are doing and to provide them with more building space. This frame is the 10th frame in Proteus. They have built it almost all the way down and are storing honey (made I'm sure from the syrup I have been providing) in the cells. 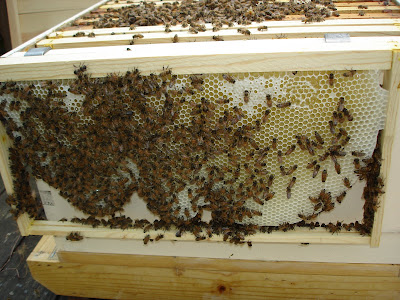 This last picture is from Proteus. This is the frame closest to the nuc center. They have built it all the way to the bottom. There are drone cells all in the center top of this frame and at the very top is stored honey. Amazing how fast and furious these bees are working! 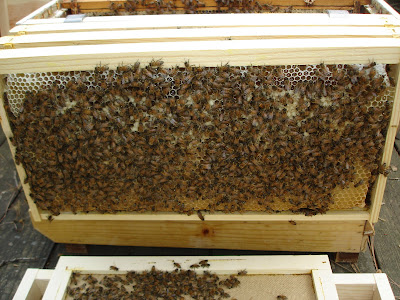 Tonight I built the frames for the medium that will go on this hive and put in the starter strips. I freed the medium frames for Mellona in quite a process that I will describe in a later post. In the morning before I go to work, I'll put a medium on both Mellona and Proteus fitted with starter strips since they have more than met the guideline that they build out 80% of a box before the beekeeper provides more brood space.

Email ThisBlogThis!Share to TwitterShare to FacebookShare to Pinterest
at 1:29 AM
Labels: festooning, starter strips