In Mellona today, the combs in the medium were being drawn well and straight. You can see the bees festooning in the picture below. I didn't disturb the hive much because I only had a short time before I had to go to work. Also it was cold and I didn't want to freeze the bees - just wanted to make sure they were building straight comb.

This hive is in an old repainted deep box and the medium box where this picture was taken is also an old box. The frames they are using are old frames - you can see the comb remnants from last year in the bottom of the frame. I wonder if the smell of the old comb, etc is helping these bees draw straight comb..... 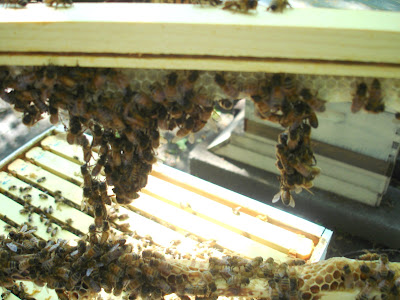 Here is an example of an almost-filled comb from that hive: 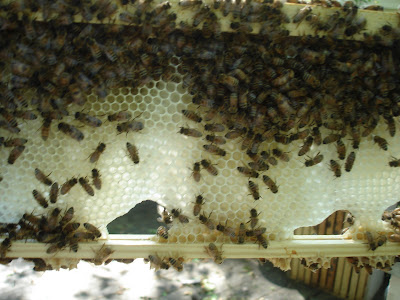 I took off the honey super shallow box that I added last week and looked in it to see if the bees were building comb yet. They had barely started. In addition, I had put a full sheet of SC foundation in a frame in the center of this shallow.

The bees had completely chewed out the foundation. I actually heard them doing it. While it was really cold I went out and listened to the sides of the hive - it's something that I like to do because the smells and sounds of the hive at work are just wonderful. I heard the sound of them crunching and wondered what it was. Now I know.

I didn't run that foundation top to bottom (cutting error), but it extended to about 1/8 inch from the bottom. For some reason they didn't want it there and chewed it off......SC foundation is really expensive and the cheap part of me felt resentful that they wasted it like that!

On Beemaster I asked about the chewed foundation and the reply was that they probably needed the wax in the box below and chewed it off to use it there. If I had waited a little longer before putting that box on, then they might have left it alone. I usually add a super or box when the box below has 7 - 8 frames drawn with only a couple to go. This time I added the super when they had only drawn 6 frames. I did this since the tulip poplar flow is on and it was going to be too cold to go into the hives over the past week. Of course if it's too cold to go in the hives, it's also too cold for the bees to fly so having the extra super was too early and not necessary.

I think the old saying is "Hoist by my own petard." No, I just looked it up on Wikipedia and actually that's not the correct expression because it means to be harmed by something you intended to harm someone else (as in being blown up by your own bomb). 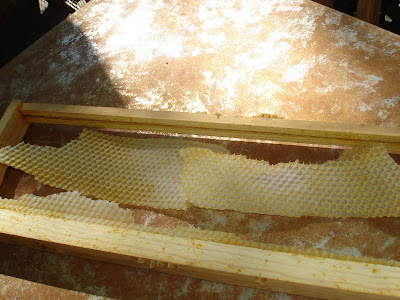 I took a brief look into Bermuda - boy, those are angry bees in that hive. They growled discontentedly when I opened the inner cover, and buzzed at my veil. They have not begun work in the medium that I added last week. It's possible that the hive is queenless (by virtue of the anger and the buzz when I opened the box) so I'll give it a proper inspection later in the week. Although it is also possible that the hive is still gathering strength since it was so weak a month ago.
Email ThisBlogThis!Share to TwitterShare to FacebookShare to Pinterest
at 9:03 PM
Labels: festooning, foundation, hive inspection, queenless roar