I checked the brood box in the weak hive, Bermuda, today. I saw the queen, dutifully laying eggs. The first picture shows her brood pattern. She has laid brood in six or seven of the frames in good patterns. The outer two frames in this hive are filled with capped honey and pollen. I think for a queen with her work cut out for her, she has done quite well. I had put one SC starter strip frame in the number 2 position in the bottom box and they were festooning on it when I opened the box. In addition, the bee numbers are increasing and they are moving up into the medium above the medium brood box.

In the second medium, they are just starting to draw out the starter strips. There is a filled frame in the center with small cell foundation. They had drawn it out and filled the cells with uncapped honey. They were just starting on the rest of the essentially empty frames. I'm no longer worried about Bermuda. This hive may not produce honey for me this year, but they'll do fine for themselves. 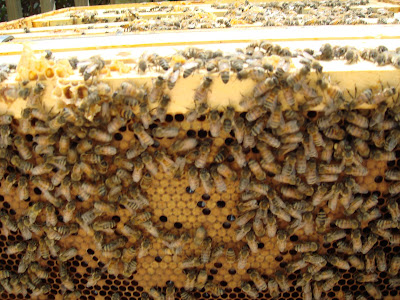 Next I went to Mellona and went into the brood box there. The girls had drawn out all the frames very straight and gorgeous. The frame in this picture is in the #2 position and you can see brood at the bottom and the edges and capped honey on the top area of the frame. 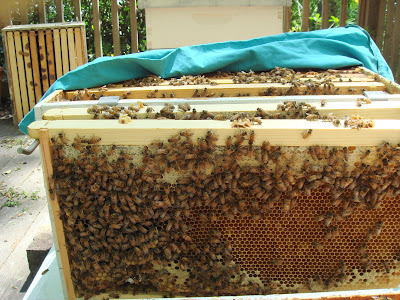 I pulled this frame out of the second box, a medium. They've drawn this comb out rather well and you can see some capped brood at the bottom. They have a ways to go in this box, however, with only six frames drawn out. The last four frames all had festooning bees, making wax, however. I was pleased. 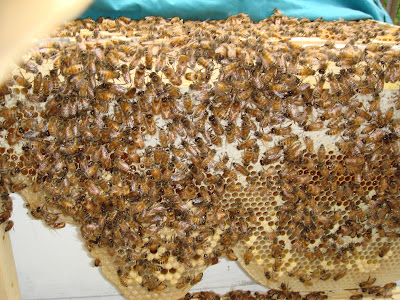 Finally I opened Proteus, the crazy comb hive. They had straightened out most of the comb. I still cut a little that was bulging over toward the next frame. I checked the bottom brood box in this hive and they had beautiful comb and good brood in all stages. The bees with the starter strips in this hive tend to build comb in two dips off of the top of the frame. I guess they'll fill in the center later? 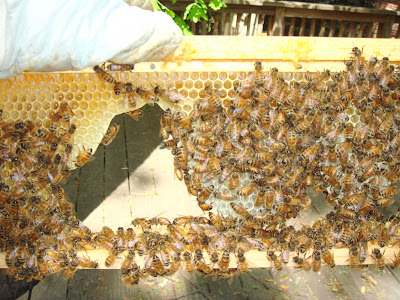 I did this inspection today especially to see if Bermuda still had a queen and if she were laying well. I am pleased and will not go into the brood box on any hive now for several weeks, unless I have reason to suspect a problem. All three looked good and were doing fine with the starter strips, albeit a little dippy sometimes.

For the next few weeks, I'll open each hive about once a week, but only to look to see if they need a new super for the honey flow.

It's funny - last year I inspected the hives because I thought I was supposed to and usually didn't have a real goal. This year my goals every time are clear. I now have a new camera and will be learning to use it before my next post.