Mellona is Bursting at the Seams

Mellona needs a new super. I put one on last Friday with starter frames in Housel positioning. Today that box is filled and all but two frames are fully capped! I was supposed to go to the mountains tonight, but I'm leaving in the morning because I needed to give Mellona a new box....how exciting!

Since I don't know if the Housel positioning was the reason Mellona did so well, I decided to go with it again. Again I didn't make a center frame but rather had the "y"s on each side of center facing up toward the outside of the box.

Mellona is making such beautiful honey that I am setting this super up for cut comb honey. I am using new frames with thin surplus wax foundation in six of them and some new 7-11 foundation that I ordered from Walter T. Kelley company at Michael Bush's suggestion. Michael says it makes pretty cut comb honey. The cell size is halfway between worker comb and drone comb. I put it on two frames and did starter strips on two more frames to fill out the honey super. 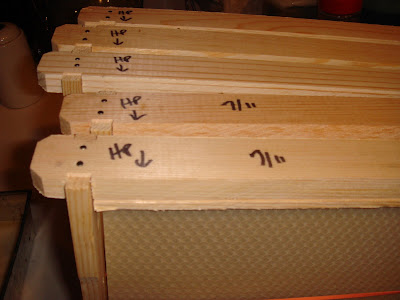 Looking at the pictures of these frames, you'll see HP for Housel positioning with an arrow. When you do Housel Positioning, you want the "y" in the center of the embossed cells to be facing upwards on the side of the frame facing the outside of the box. So I noted HP for Housel Positioning and the arrow to indicate which side of the frame should go toward the outside of the box. On the four 7/11 frames, I noted that as well and I put 2007 on these frames to let me know what year I began using them. 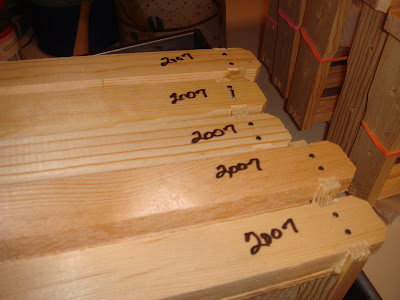 I think the picture below will demonstrate Housel Positioning. If you look at the "flower" made of seven cells of foundation in this picture, you can see that the "y" in each cell is facing up. The rougher edges mark the outside of each cell and the "y" is more faded looking. 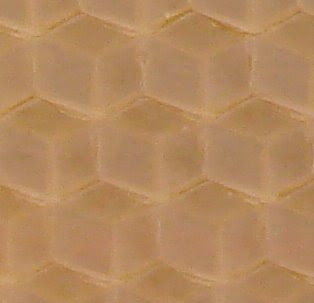 I used my now trusty wax tube fastener to wax the foundation into the frames and poured the leftovers into my beeswax bar mold and the remainder into a bread pan for the next waxing event! 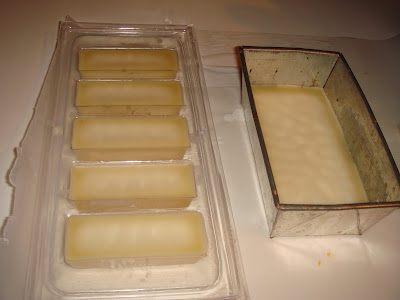