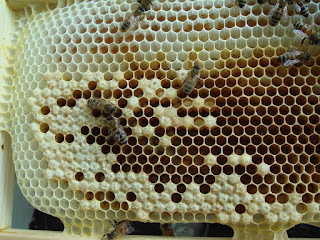 I inspected Proteus from top to bottom (well, almost) today. There are definitely two queens. What should I do now? That is the question.

Proteus Bee, the top three boxes above now the queen excluder, had a skimpy brood pattern and not many bees. The first two pictures are from Proteus Bee. I was nervous as were the bees so I didn't snap pictures that were as good as sometimes.

The queen excluder was put on 8 days ago. You can see young larvae on the right of the second picture. That larvae was from eggs laid more recently than 8 days. That said, I was concerned about the spotty, skimpy brood pattern in this box.

The second two pictures are from Proteus A. Again you can see young larvae, suggesting a second queen in this bottom box. The comb on this box is dark from being used over and over both due to age and due to being honey bound by the honey frames in Box 2. 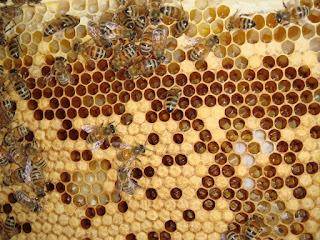 If you look you can see young larvae scattered all over this frame.

I am going to leave the hives as an apartment complex with the queen excluder in between the bottom two boxes and the top three. We'll hope that both groups will thrive and I can move them into two hives.

If Queen Bee does not survive, I will still have one good hive. 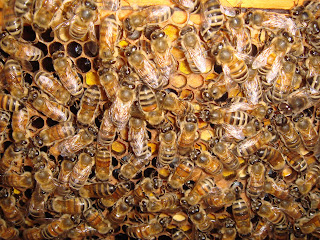 Email ThisBlogThis!Share to TwitterShare to FacebookShare to Pinterest
at 11:49 PM