One of my Hives may be a Two-Queen Apartment Complex 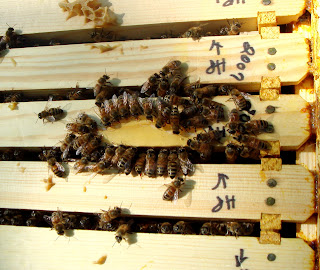 Today I opened the Proteus hive (the one that made crazy comb earlier in the season) to see if I could make sense of the hive configuration. Here's what I had noticed last week:

I posted a query on Beemaster to see what might be going on. The responses included the possibility that I might have two queens - in effect one hive living on top of the other.

Typically in a hive the brood nest is continuous. The queen works her way through the frames in the bottom box and then moves up into the next box. In this hive a full super of honey separates the brood nest - this is not the usual formation in a hive. However, the bees are using only one entrance, for what that's worth. 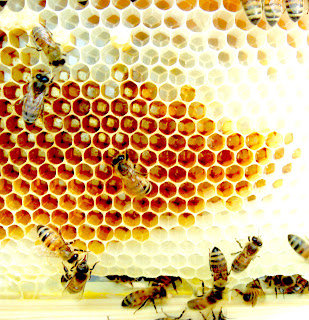 Today I wanted to see if there were a laying queen in the upper box. In opening the box, a honey comb opened. I love the circle of bees sealing the edges of the honey spill and gathering it back up to use in the hive! 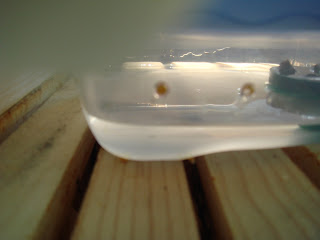 In the second picture you can see who I think is the queen, backed into a cell in which she is laying an egg. All of the cells to the right and upwards from the queen each have a single egg in them. If you look carefully you can see the eggs - they look like a grain of rice standing on end. There is only one egg in each cell, eliminating the possibility that this might be a laying worker (who often lay two or more eggs in each cell).

I also checked the small hive beetle trap on this visit and found no beetles in it or any of my other traps. A post on BeeSource (see Rob-bee's post at the bottom of the page) suggested that my holes aren't large enough for the SHB. They are supposed to be 3/16". I plan to take the traps out next weekend and enlarge the holes. The bees have propolized the holes in the trap on Proteus (the apartment complex hive).

I also am having a mild, mild infestation of SHBs this year. Last year they were everywhere by this time. I'm wondering if the hard freeze of 20 degree days we had the first week of April wreaked havoc on the SHB population.