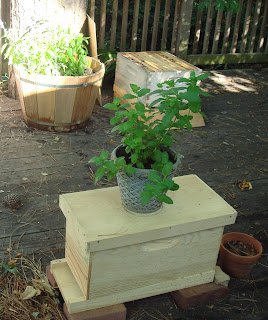 I didn't inspect the hives today, but wanted to glance in the small swarm nuc to see how things look. You'll see very few bees on the landing, but I don't think they have much need for foraging right now. I supplied them with a full frame of honey from Mellona as well as the honey around the edges of the brood frames I gave them. 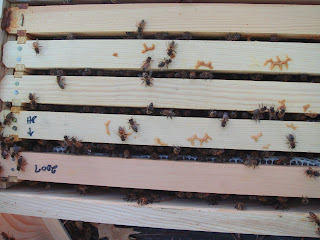 one completely filled frame of honey (in the #5 posiition, the one marked 2007). And they have a frame from the old hive left from the swarm's arrival in the #1 position which has some pollen on it but nothing else (the one with the staple at the end).

I opened the nuc and didn't hear the "we-are-queenless" roar. Instead they are quietly working and there are many bees - you can see them between each frame.

If the new queen (assuming she is there) has started laying, as she should have in the last day or so, then we can assume there will be a need for foraging for pollen. I may look for signs of laying tomorrow, but feel pretty assured that there is a queen alive and well in the hive since they didn't use the last egg/brood frame I gave them for making queen cells.

BTW, we had a tiny bit of rain during the night last night but it is still so dry here that when I checked my garden this morning, the soil is bone dry less than an inch from the surface, damp from the rain last night.

Email ThisBlogThis!Share to TwitterShare to FacebookShare to Pinterest
at 9:12 AM
Labels: bringing in pollen, queenless roar, rain, small swarm