Splitting Proteus into Proteus A and Proteus Bee 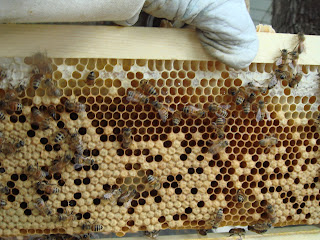 Well, today I split the two-queen hive, but I don't know if I did the right thing. I moved the top hive into an 8 frame medium. I moved the brood frames into the first box over the slatted rack and SBB and then put the second box above it, with the honey frames from the old hive. I tried to keep the brood in the same place in the hive.

After I did the whole transformation I started thinking that I didn't really see any larvae today in the upper hive (Proteus Bee) although there was plenty there on Wednesday. There's a picture to the right of the brood pattern which looked more filled out than when I saw it on Wednesday, but I'm not sure there was any new brood since Wednesday. For a few minutes I thought I should put it all back and just remove the queen excluder, letting them be one big hive.

Then I decided that I might as well go ahead and make a split even if the queen were no longer present. So I took a frame of very young brood and hopefully eggs from Bermuda and added it to the brood box in the new hive. I put the two hives side by side, in the way that Michael Bush describes an even split.

Although now in looking at the first picture I wonder if the queen isn't the bee in the middle of the first picture on the left side. It's out of focus so you can't really tell. Well, if she is, great, and if she isn't there, the new frame of brood gives the hive an insurance policy. 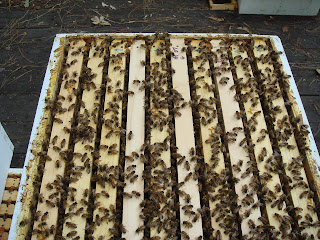 I figure that this way even if the queen is dead, they have the potential to make a new queen. I had a hard time finding brood and eggs in Bermuda, but I could add another frame tomorrow and may do so, just to make sure.

In the even split method, with the hives side by side, some bees may drift to the new hive. In about a week, I'll switch the hive positions and even out the drift and hopefully also even out the population.

I looked in Mellona, my best honey producer, and found that this hive was honey bound in the way that Proteus was. Above the brood box in Box 2 was a medium, frame to frame honey. In this hive, I tried something to open up the brood area. I took out frames 3, 5 and 7 and put in their place starter strip frames. This encourages the queen to move up.

While I was looking for brood, I saw a swarm cell on one of the frames, so I think that the timing of opening up the brood box is either right on target or too late. See the newer looking frames in the picture? Those are frames 3, 5 and 7 of starter strips that I have added. 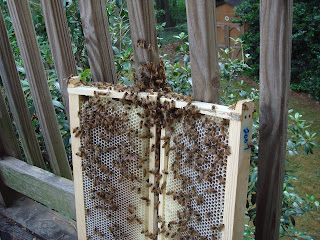 I put these full frames of honey in the super above Box 2 (Box 3) in positions 3, 5, and 7. To do this I had to remove nectar filled frames from Box 3.

I set the frames aside that I removed from Mellona - they were filled with unprocessed nectar (where are they getting it in this drought?). The bees from these frames which were leaning against the deck rails made a cluster on the rail and I took their picture. The cluster was gone 5 minutes after I removed the frames.

I really didn't know what to do with the frames. I shook the bees off of one of them and gave it to the new Proteus Bee and took the other two inside the house. They are mediums and the two upper boxes on Mellona (the hive where I got the frames) are shallows, so I can't put medium frames in them.

This is a clear argument for using the same size box all the time. I have on Mellona two shallow boxes of frames for clean-up. In the next week or maybe even tomorrow, I'll add another medium box to Mellona for brood and will put the nectar laden comb frames in that box along with starter strip frames.

I also harvested 9 frames of honey from Mellona, my best producing hive this year.

I ended my time in the bee yard today by giving Proteus A a powdered sugar shake. Proteus A is the hive where on Wednesday, I took the clear picture of the bee with a Varroa mite on her back.