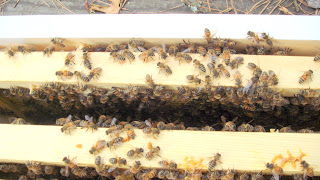 The small swarm hive was doing fine. Signs were there that the queen was laying well. There are plenty of bees. They are still ignoring the last three frames on the hive, but that's fine. They've only been in the medium 8-frame box for a week.

Proteus Bee is quite a different story. There is no sign there of a laying queen although I gave them brood and egg frames and had seen two queen cells in production on June 23. I didn't see a queen, and felt rather discouraged, but left them in their hive and gave them two more frames of brood and eggs from Bermuda in case they need to make yet another queen. I saw one open queen cell but no evidence of laying.

We've had really stormy weather over the early part of July and if she left on her mating flight she may not have returned. I want to give them a chance. Interestingly this hive was using the upper entrance when they were above Proteus A and I have noticed that the bees in this hive rarely enter through the front door - more often through the upper entrance!

In Bermuda, I found tons of bees and a super of honey with beautiful capped honey for cut comb. I learned a lesson in Bermuda. I found a frame that I had used rubber bands to hold in comb that broke. I had put that frame on the side of the hive box. The bees had fastened the comb to the side of the box. I won't put a repaired comb with rubber bands against the side of the box again. I took this out and will melt the wax - not put it back in the hive.

Today I went on the inspection with several medium frames constructed and with starter strips or full sheets of foundation waxed in. I am so glad because there were a number of frames I either moved or changed and was so glad to have the extras. I'll do that on every inspection going forward. 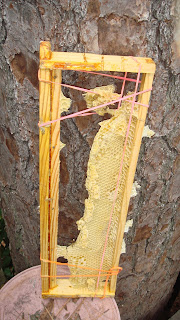 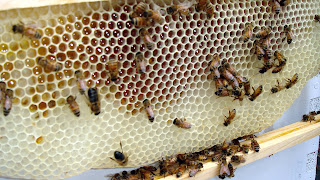 However, in 2, 4 and 6, they had cleared out the honey in the traditional football shaped pattern and although the queen wasn't laying there, the groundwork was all done. I felt good about opening up the brood nest. Look how shiny the cells are now that they are empty of honey. 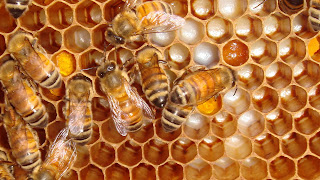