The "Come Hither" Allure of Lemongrass Oil and Nasty Water 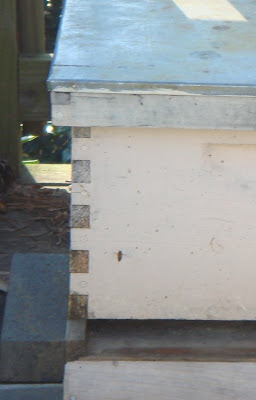 I've been out of town all weekend and returned to a bright, warm sunny day in Atlanta. I noticed at least three bees drawn to the allure of my lemongrass oil slick wiped on the landing deck as well as the frames and inner cover of the hive I've set out as a swarm lure. I don't know if these are simply the bees from my two hives on the deck who are curious or if they are scouts from a swarm in the making. I took at least 20 pictures to get these two and they aren't very good, but at least you can see the curious bees.

Bee curiosity is demonstrated in their flight into the hive. A bee who lives in a hive literally makes a beeline for the landing and goes without hesitation into the front opening unless there's a crowd on the landing. When a bee is looking at a hive that she doesn't belong to, she approaches the front by flying up and hovering watchfully, often several times before she lands and goes into the hive. (Robber bees often exhibit the same caution before entering).

Notice the darker area on the landing - this is where I spread the lemongrass oil/beeswax/olive oil spread that I made to act as a lure. 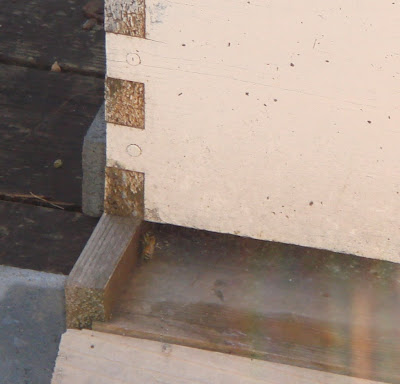 I also found bees in this nasty water collected in last year's flower pot. Over the weekend there was a tornado in Atlanta (not near my house) and lots of rain. Before this weekend, there was collected water in the top of this pot but the dead plant life provided a place for the bees to land. If you look at 12:00 in the pond-lake, you'll see a dead bee. 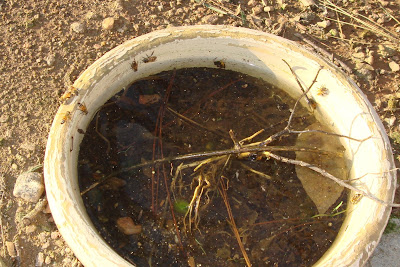 Upon observing this, I felt a need to provide them with a better landing place and put a broken stick in the pot that you can see in the close-up shot in the last picture. 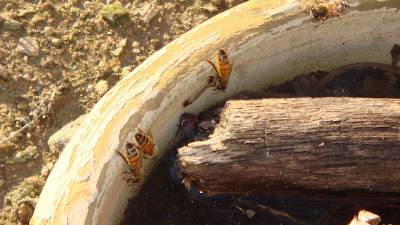