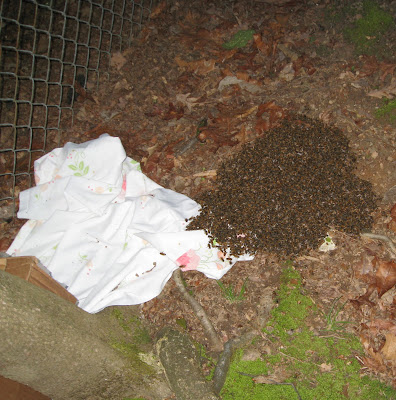 Well, I returned at sunset to find NO bees in the box and all of the bees clumped not on the sheet but on the ground. Obviously I had left the queen on the ground and never got her in the box. So the bees, as one would expect, joined her.

Now the neighbors on both sides of the fence were watching me through their back windows while I struggled with this problem. I turned the box on its side near the bees on the ground. I took the extra piece of cardboard and scraped the pile of bees into the box, hoping that the queen was included. She must have been because the bees began moving in a rather orderly way into the box. 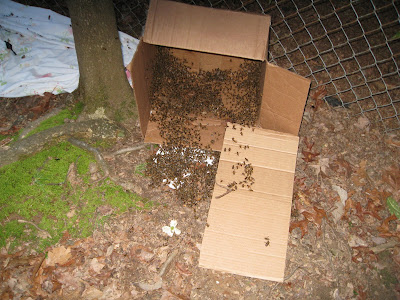 Here they are up close and personal. I used the sheet, the cardboard piece, and my yellow bee brush to aid me in getting the bees in the box. It was tedious, and the sun had already set, so I had to get the job finished and take the bees away. I even went back to the car to get a magazine to give me yet another something to slide ground bees onto. By 8:45 PM all the bees were in the box. I closed it and taped it closed with duct tape. 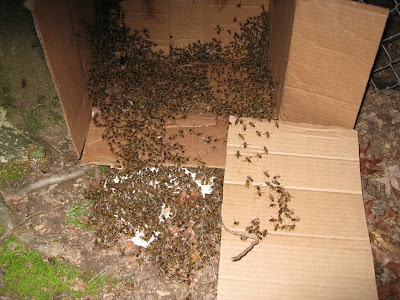 Before I went back to pick up this swarm, I really studied my bees on my deck. I don't have room for this swarm. I had fun getting it (except for the getting stung part), but I do not need this hive.

I looked at the bee club member list and found the number for my friend Nicky. When I first got my bees she was kind enough to come over and help me to do my first inspection. I have always wanted to do something for her to say thank you.....so I called Nicky. She said that she had had five hives but had lost four of them over the winter. She would be thrilled to have these bees. So as the day ended I delivered these boxed up bees to Nicky's house where she will install them in a hive box. I hope they thrive and that she has fun with them.

Email ThisBlogThis!Share to TwitterShare to FacebookShare to Pinterest
at 10:33 PM
Labels: swarm