Today I went to PN Williams' apiary to get a queen for the queenless nuc I had purchased from him. He had told me the queen was in a "queen motel" and would have no attendants and would need to be installed in the hive as quickly as possible. I was free, luckily, this afternoon from 2 - 5, so I could drive the 30 minutes to his house, pick her up, drive 30 minutes to my house and install her before going back to work in a few minutes.

It turned out that the "queen motel" referred to a shoe box sized ventilated box containing a number of queens in cages but not with attendants as they would be in a package. He gave me the queen cage with a candy plug (already opened) and I headed for home. I hung the cage on a frame with a wax foundation so that I could use a twist tie to support it. 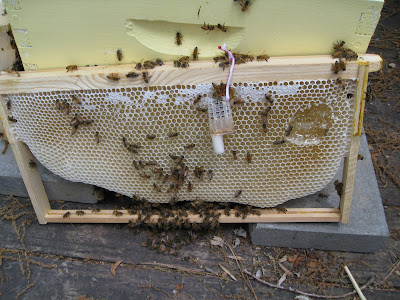 I put the frame back into the hive and the bees were all over it. They have been desperate for a queen for 10 days now. When I closed up the hive, I couldn't see the queen cage because it was covered with bees. 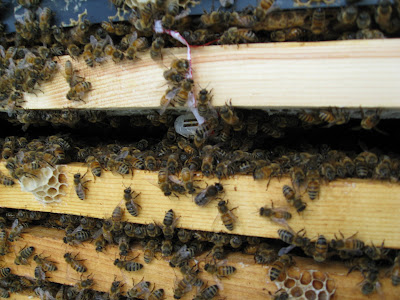 Within five minutes of closing up the hive, a worker bee dragged this pupae out the front entrance and dropped her on the ground. I had supplied this hive with a frame of brood and eggs to help them make their own queen. The shape of this pupae caught my eye and I took its picture. I wonder if this were a queen in the making, but the minute the real thing arrived, they cast their creation out. 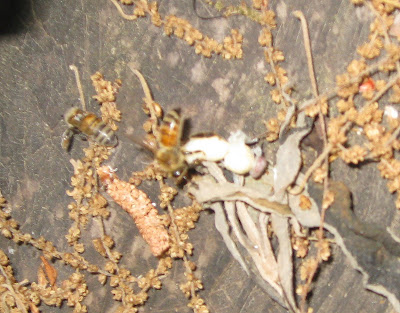 Below you can see her a little closer up - I'm having a hard time with the macro focus on my camera, but this at least lets you see her back. 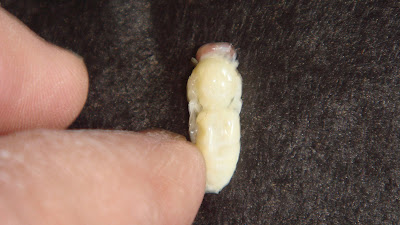 While with the bees I added sugar syrup to several feeders on the nuc hives and opened one of the swarm hives that I hadn't checked since I installed it. There is definitely a laying queen there - I saw eggs. They've built out the lower box and I added a new brood box.