Another Adventure at the Blue Heron Nature Preserve

Two of the hives at Blue Heron appear to be queenless. I helped the guys look at their hives two weeks ago and there is still no brood, no eggs, no sign of a laying queen. They decided to bite the bullet and buy new queens, rather than using a frame of brood and eggs since the time involved would make them miss this ongoing honey flow.

The frame below is what all the frames in the hive looked like - lots of room for brood but no eggs and lots of nectar stored but little else. Wade installed his queen by laying her box on top of the frames in his 10 frame box. 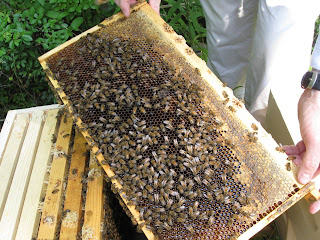 He took the cork out of the candy end of the queen box and laid her on top of a central frame. I brought him a 10 frame shim to borrow to allow her release without removing a frame. 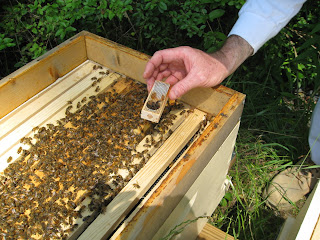 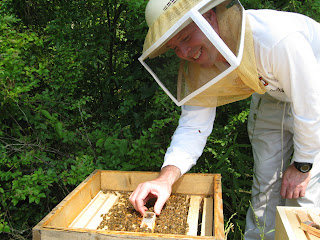 We closed the hive up and he'll check on her release state in about 4 days.

Kent is using 8 frame boxes (in the picture below). They are built with more space in them. He was able easily to space his frames in the box and allow room for the queen without removing a frame. He tied the box and then attached it to a thumb tack on a centrally located frame.

He too will wait four days and then check to see if she is released. 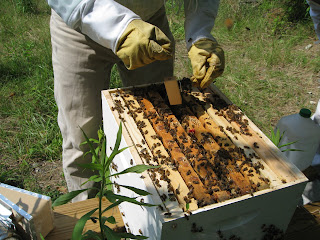 I'm really enjoying helping these guys with their hives at the Nature Preserve. They are all enthusiastic and eager beekeepers. Their excitement about their new adventure makes it all the more fun to help them out.

These guys caught a swarm while I was at Young Harris. It literally landed on a tree in the garden area near their hives.

We checked the box they put the swarm in and saw eggs and young brood. Clearly the queen in the swarm hive is thriving. We all cheered.

Great to have one hive doing well with a laying queen while the other two are getting a slower start.