I forgot to report on the queen in the queen cage. She was introduced and four days later the candy had been all eaten and the queen had been released. I took the empty cage out of the hive and closed it up.

Today I am back home after being gone for a week. I wanted to check on my hives to see how the empty boxes were faring.

In the first swarm hive, the bees were drawing comb in the starter strip frames, but not too rapidly. This is how the comb looks when they first get started with it. Gradually they fill the frame - often starting with three sections like this one. 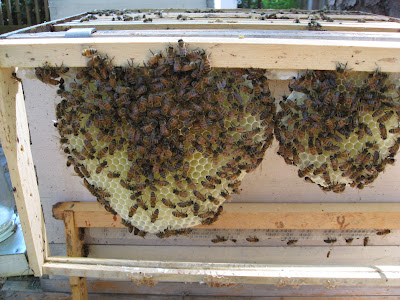 In the second swarm hive, in spite of having a new box above the brood chamber, they had built burr comb on the tops of the brood frames. I scraped it off and tried to line up the frames in the second box to match the one below. I find that the 8 frame boxes are not as tight as the 10 frame ones and it is easy for frames not to be in line.

Interestingly in this hive and one other, the new wax, instead of being clean white was bright yellow. I didn't take a picture in this hive but did in Mellona. There was good brood and eggs in this hive which is building up well. 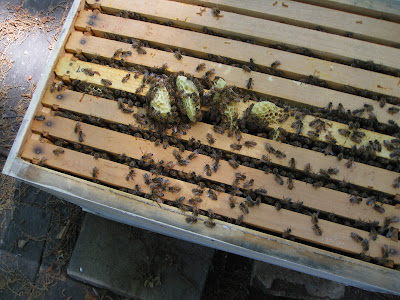 Here is some of the new yellow comb from Mellona - quite pretty and I wonder why it isn't white. Usually comb darkens or discolors when the bees walk over, leaving footprints as it were. Maybe there's lots of yellow pollen out there to stick to their little feet! 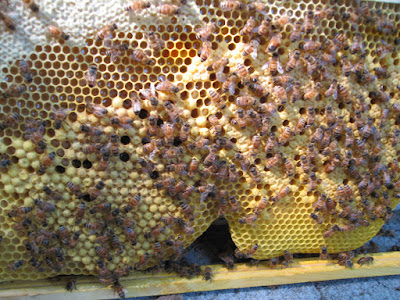 The worse part of this inspection day was that the queen released hive shows no sign of having a queen. There was not a queen sighting and no brood or eggs. There was a queen cell that had been ripped open, implying that a queen at least had been present, but if she is, she's a virgin and not laying yet and the queen I got from PN was supposed to be mated.

So I added another frame of brood and eggs from Mellona to this hive. If they don't make a queen and don't get going, I'm going to combine them with another hive. There are tons of bees in this hive and they deserve leadership.

I thought I'd post this picture. In the hive below, I had used a rubber band to hold the one foundation piece I had put in their new hive box. After the bees started drawing the comb, they cut the rubber band and dragged it out the door! You can see the red rubber band on the entry way.

Well, this post has been a hodge-podge of interesting bee stuff. I'll try to focus more the next time! 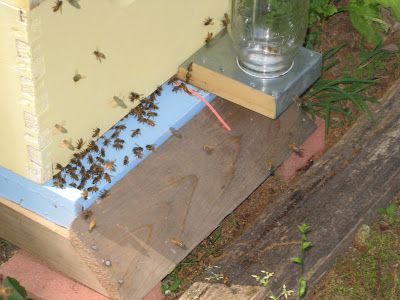