Before I went out of town to a conference in the middle of the honey flow, I put a super on each hive to allow them to use the space to make honey. My smallest swarm hive was one on which I quickly put together a super and threw it on the hive before leaving.

In an inspection I always remove frame #2 as a way to start examining the hive. This allows me to move the frames within the hive - not needing to take each one out unless it seems necessary. Removing this one frame in position #2 also means that when I put the frame back into the hive box, my bees press against each other rather than against the hard outer wall of the hive box. I think I kill less bees on inspection this way.

As you can see the bees in this hive have built combs filled with honey in the space left by having a shallow frame in a medium box. I worried about how to handle this and posted about it on Beemaster. 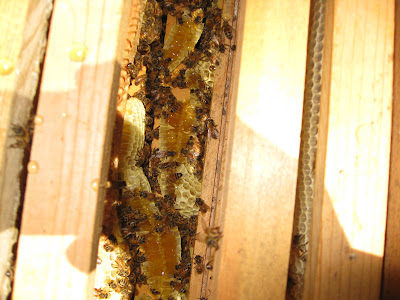 In the end, I opened the hive up again and took off the medium box with the shallow frames. I scraped off the burr comb and put it in a cake pan. I then added a medium 8 frame with all medium frames (DUH). I took each frame out of the original box and examined it. Most had not been built out. Three had comb attached to the bottom. It's beautiful comb (see picture below), but is not in a useful place. 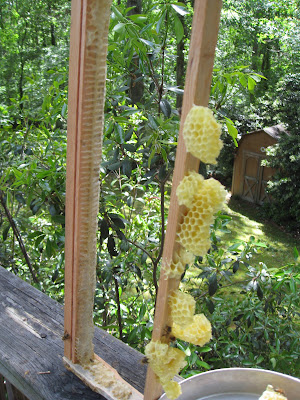 I didn't want to take the honey the bees had worked so hard to produce. I took the burr comb in its cake pan and put it under the top but on top of the inner cover. This should inspire the bees to move the nectar into the hive itself. I didn't have a shim to put around the cake pan, but I did have several 2X4s cut the right lengths. So I set up a fake shim under the top and set the cake pan there. The bees can clean it up and I'll remove it tomorrow. 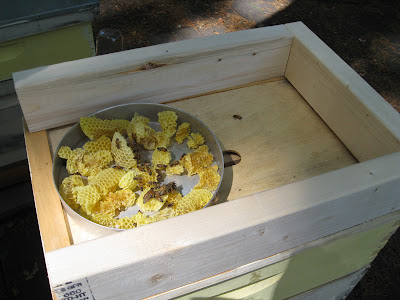 Here's the clean new box on this hive (which will have a name before morning - the hive, not the box). 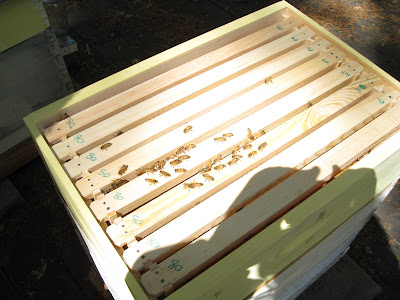