As my grandson (age 2) and I were shoveling chips from a tree removal and taking them in the wheelbarrow to put in my flower beds, I looked up and saw the swarm below hanging in a very young Japanese maple in my neighbor's yard. 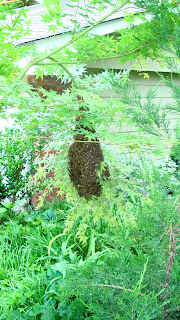 Dylan and I both ran inside and put on our bee veils. He stood right beside the wheelbarrow about 15 feet away while I approached the swarm with a cardboard box. Literally when I was one step from the swarm, the branch broke with the weight of the hive and the bees fell to the ground. 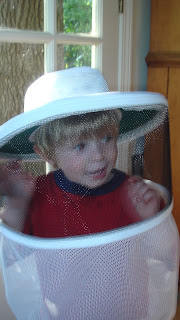 I picked up the branch (and bees) and put them in the cardboard box, but about three hours later, all of the bees had left the box and were hanging on both sides of the cardboard I had set up as a ramp to the box as well as in a clump on the ground. The queen obviously was still not in the box when the branch was put there.

After Dylan went to bed, at twilight, I tried to slide the bees on the ground onto a sheet or onto another piece of cardboard but was unsuccessful and got stung several times. I've left outside the box, the sheet and the cardboard ramp. I don't know how to manage this swarm.

Maybe they'll leave in the morning and maybe they will all be in the box (RIGHT....) I've posted on Beemaster to see what other beekeepers think I should do about this swarm. I only have a nuc to put them in and maybe they'll go there - it's in my carport within fifteen feet of the swarm and there have been scout bees sniffing around it for the last few days. 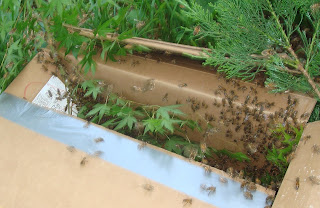