Today in the 98 degree weather at the hottest part of the day (3 PM) I inspected my hives. I found a couple of interesting anomalies to share on this blog. In Persephone all of the frames were built out, but only in the front 2/3 of the frame. What do you think that is about? I'm going to post on Beemaster and I'll let you know what they say. It was the oddest thing. 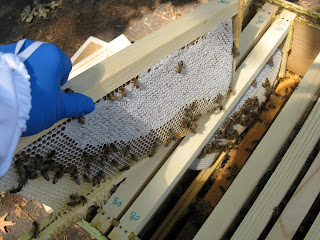 When I opened Melissa, I was thrilled to find this pure white capped honey. Isn't that gorgeous? The super wasn't fully capped so I won't harvest it yet, but I was impressed with this new hive. Mellona does have a box of capped honey that I will remove this weekend. Some of it is pretty enough to cut into cut comb honey. The honey below needs a little more time to be fully capped. While the frame in the picture is capped, there were at least four or five that were not fully capped in this super. 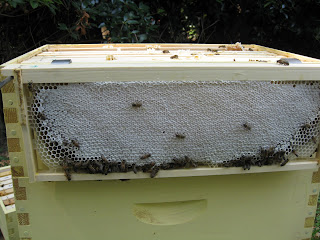 I have been giving the bees starter strips of wax in the frames and in each box I put one full sheet of foundation. However, since these are honey supers, I am using thin surplus foundation that I ordered my first year to use in shallow supers. Since this is a medium super, the foundation isn't long enough to fill the frame.

I forgot to on this frame. See how the bees indented the comb to accommodate the rubber band! 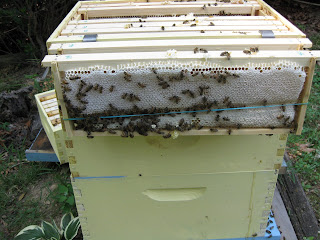 Finally in inspecting all of my hives today, I only saw one small hive beetle. However, this year for the first time, I have silverfish - yuck. (Whoops! See comment below - it's an earwig.) 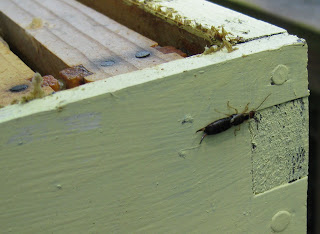