At Young Harris Beekeeping Institute this year, I heard some of the people who were taking the Certified Beekeeper exam comment that there was a question on the exam about how many nails do you need to put together a frame? One might think 8 - two at either end of the top bar (4) and two at either end of the bottom bar (4), but if you gave that answer, you would not be right.

Unfortunately yesterday while inspecting, I tried to free a frame built last year from the propolis glueing it to the hive box. The picture below was the result. The top bar pried from the propolis, pulled up on its own and separated from the end bar. This is a good object lesson for me - last year I didn't glue my frames and I only used 8 nails on most of them. 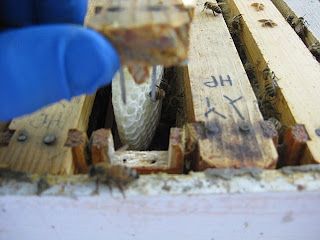 Much to the bees' displeasure, I pulled out my trusty hammer and nailed it back together but didn't add the 9th and 10th nail (didn't want to disturb the girls even more), but I have learned my lesson - never put together a frame without glue and with only 8 nails! 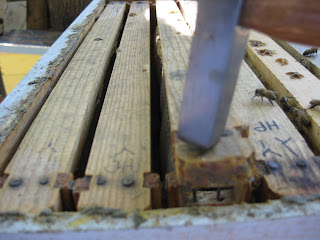 Benjamin Franklin even included a version of this rhyme in his Poor Richard's Almanac.