When a hive is weakened, as Hyron was by robbing, then the bees and the hive itself become a playground for opportunistic insects. Small hive beetles become bolder. Wax moths may be able to lay their eggs and complete a life cycle. And from the outside there are wasps and other marauders such as the bald-faced hornet shown below.

This is not a good picture of the bald-faced hornet because he is curled around a fighting little bee. I watched the hornet capture the bee just as she left the landing deck of the hive. He wrestled her to the ground. She fought a good fight but in the end, the bald-faced hornet, cannibal that he is, carried her off to feed his young. 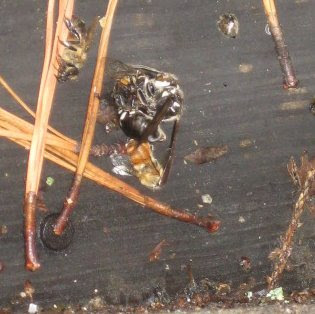 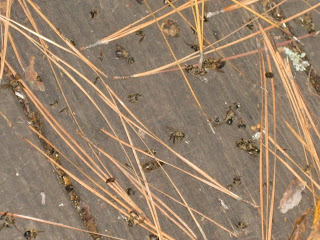 The bees are cleaning up in earnest. The robber screen makes it difficult. I always marvel when the mortician bee carries out the dead, flying with a body the same size as her own. However, the pile of dead bees in the corner of the robber screen has diminished, implying that the bees are carrying out the dead in spite of the obstacle of the screen. 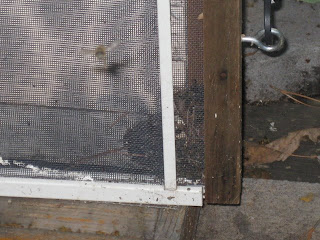 I've opened the robber screen to give them about a 3 inch entry which you can see at the top of the robber screen in the picture below. The photo shows a bee aiming to land in the entry and you can see bees crawling up the screen from the landing to enter the hive at its new temporary front door. 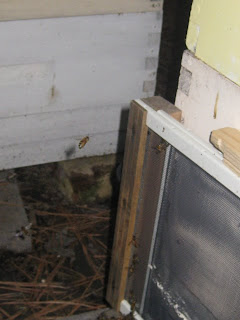 I opened the hive today to put on a shim and a baggie feeder. I went full suited because this has been a very aggressive hive. There was no queenless roar and no attacks on me. I don't know if that represents their defeatist approach now that the war is over. Maybe the lack of a queenless roar means that the queen is still alive and survived the attack. And then again, it may mean that the queen is dead but they don't have the spirit to care.

I didn't want to open the hive for inspection because it was 7 PM when I got home from work and because they've been through enough right now. Having me tear apart their house after having marauding intruders a few days ago felt to me like adding insult to injury.

I do feel good as a beekeeper that I gave them a big baggie of sugar syrup, protected this time by a shim. I hope this hive can survive. If it's still alive next week, I'll probably combine it with Aristaeus, one of my other swarm hives. I'll especially make this decision if the queen of Hyron is dead.