The Continuing Story of the Small Cluster

For four days of solid rain, this cluster has been gathered under the hive that I had named Hyron. I've watched the cluster every day but the rain has been continuous and I haven't been able to see what's going on. Today after I installed the queen in the Devorah hive, I checked out this cluster. 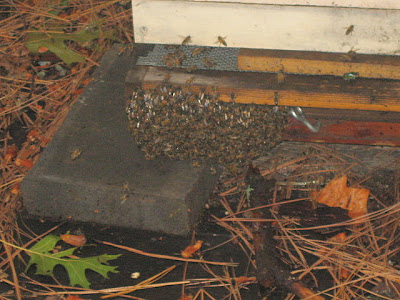 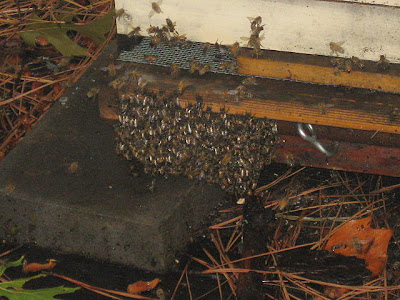 After days of solid rain, the bees below are all that are in the cluster - about two cups or probably one pound of bees. I couldn't let them just die there and there probably is a queen in the center. I went inside and got a Tupperware storage box (about a 2 pint size) and slipped it under this cluster. Many bees fell into the small Tupperware container. I brushed others into the box.

I took the bees and dumped them into a 5 frame medium nuc. There's probably not much point, but I had five frames of fully drawn comb and thought maybe they could use it to establish their hive again. The box they are hanging under was filled with ants, wax moths, and vagrant bees. Before winter I may combine them with another hive but for now, they'll at least have a chance.

Two hours after the transfer, I lifted up the top of the nuc to see what was what and there were lots of bees in the box. Cross your fingers! 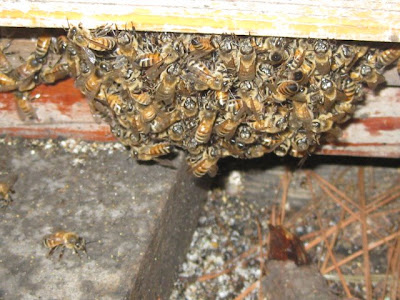 Email ThisBlogThis!Share to TwitterShare to FacebookShare to Pinterest
at 1:17 AM
Labels: small swarm