I can't say that there is a good ending. I'm not sure about the hive box that I put on top in the combination. Maybe the queen was in there although I didn't see evidence of her and didn't find her.

I put the two boxes together with slit newspaper in between and left them for a week. All of the Internet forums said that within that time the bees would chew through the newspaper and join each other. I should see a pile of chewed newspaper in front of the hive. Well, that never happened.

Instead I saw the bees carrying out larvae (see picture below) and saw a lot of conflict in front of the hive. I had been feeding both of these hives before the one was robbed out. I didn't feed them during the combination week and instead supplied the top box with two frames of honey on either side of the box. The lower hive had stored honey. 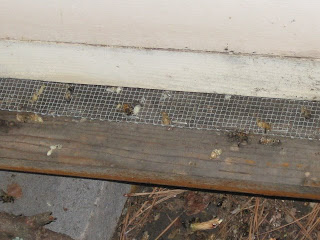 I opened the hives on Saturday to see what had happened. Evidence of the mayhem abounded. There were dead bees all over the newspaper and detritus from wax moths that had inhabited the top hive. I pulled off the newspaper, killed some wax moths and put the hive back together. 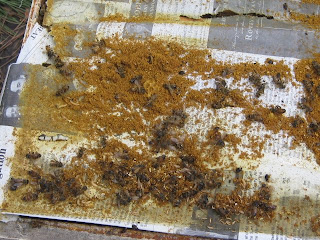 This coming weekend, I'll probably take off the top box and leave Hyron as a one-box hive. The combination was not a success. I'll have another opportunity to try to do it better in the future, I'm sure.

Email ThisBlogThis!Share to TwitterShare to FacebookShare to Pinterest
at 6:55 AM
Labels: hive combination, wax moth