Randy Oliver on Beekeeping in the 21st Century 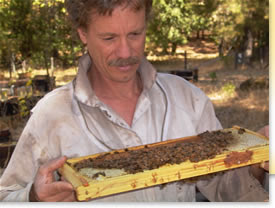 Randy Oliver gave three talks at GBA. His energy and smile infuse all of his talks with enthusiasm and his obvious love of beekeeping. I read his articles in ABJ and he is someone who is referred to often on the bee forum discussions online, especially on BeeSource.

One of the talks I heard was on beekeeping in the 21st century. I'm going to try to share what I learned from this talk.

He said that management in the 21st century would include optimal nutrition, managing parasite loads, and using appropriate biotreatments at the right time.

Optimal nutrition means having a variety of pollen being brought into the hive. If you pull a frame with pollen on it, you should see lots of colors - this indicates a varied diet for the bees. He showed a slide comparing a "fat bee" with one that is not. House bees have lots of vitagellin and this keeps them alive and kicking. Foragers lose this fat and begin to age rapidly. Although he encouraged avoiding feeding bees as much as possible, if one feeds a pollen patty to the bees, they should be fed sugar syrup 1:1 at the same time.

For parasite management, he talked about the rapid increase of the varroa in the hive - at the rate of a 2.5% population increase per day. Sugar dusting with powdered sugar can help.

He had a wonderful picture of his methods, as he has described in ABJ.....a bee brush duct taped to a measuring cup in such a way that one can dump the cup and then with a flip of the wrist use the brush to brush the sugar off of the frame tops. The brush is taped one way for left handers and the other for right handers. I can't find a picture on his site, but you can imagine.

He also discussed working on retarding mite growth during spring build up and encouraged us to check for mite levels before supering up. Beginning August 15 all beekeepers should work like crazy to get the mite levels down in the hives so that the September bees who live through the winter will not be mite-infested.

When he is checking for mite levels with a sticky board, he sometimes does a check 10 minutes after sugar dusting. He uses his sticky boards over and over and cleans them with an ice scraper - really quick and effective.

If you can keep mite levels down under 1%, this will help not only with bees' health but also with honey production. Under 1% means that a 24 hour sticky board fall would be 10 mites or less, doing a sugar shake with a jar of bees - I believe he said 1 inch of bees in a mason jar = 100 bees - should only yield 3 mites, or a 10 minute sugar shake check of the sticky board should show a drop of only 5 - 10 mites.

He has invented a fabulous frame for drone management in the varroa fight. People use drone cell frames to grow drones and freeze the frame to kill the mites. These frames have to be on the hives for 28 days to assure readiness to freeze. To address the time issue and be more efficient (I experienced Randy Oliver as incredibly efficient about time usage), he invented a frame for drone management that does not involve freezing.

This frame has a bar in it about 1/4 the way down. He puts it in the hive with no foundation. The bees store honey in the upper fourth. In the lower fourth they will build drone comb. He pulls this frame, cuts out the capped drone comb and throws it away or melts the wax down. The process takes 15 seconds, can happen at the hive, and doesn't take up freezer space - see what I mean about his efficiency!

He also discussed, as many people are today, the idea of making late summer splits to interrupt the breeding cycle of the varroa mite.

When he talked about biotreatments, he discussed oxalic acid and formic acid. He treats his hives on the day after Christmas because the bees are not growing brood at that time.

This is purely an overview of what I understood. I encourage you to visit his site and read his many articles. I love reading his articles in ABJ because he writes in a very easy to grasp way. He ran a series on Nosema earlier this year and has written on Honey Super Cell, Powdered Sugar Treatments and many other topics.
Email ThisBlogThis!Share to TwitterShare to FacebookShare to Pinterest
at 7:42 AM
Labels: drone, GBA, powdered sugar, Randy Oliver, Varroa mite