Two Out of Three's Not Bad

The combine of Hyron and Hyron2 didn't appear to work. However in the rain last week, a cluster of bees (about 2 cups worth) remained clinging to the bottom of the entry way into the hive. As the rain increased, the cluster got smaller, but it was clear that a queen was inside.

The hive they were clinging to wasn't really worth it - full of wax moths, roaches, ants and a few bees. So I gathered the cluster into a Tupperware container and dumped them into a medium nuc box. I also moved the original hive directly in front of the nuc in case any of the residual bees wanted to join their sisters in the nuc.

I then went out of town for five days.

Today the nuc has absolutely no bees in it. The larger box in front of it doesn't have bees either. (I felt really foolish because I smoked the door and waited a minute before opening this totally empty hive! ) 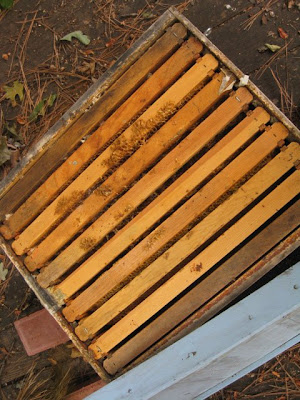 I took the hive apart and found slews of dead bees on the screened bottom board. 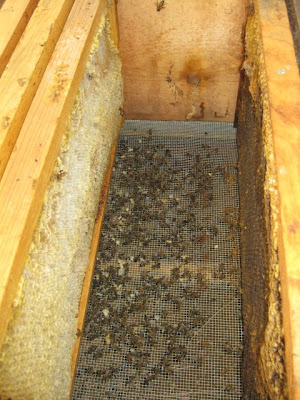 And all but four frames were heavily wax moth damaged. I left the damaged frames leaning against my oak tree on my deck - there's a squirrel who will be grateful and will clean it all up for me. 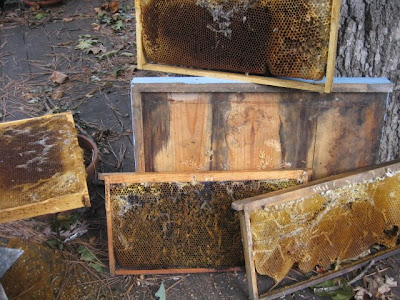 I picked up some of the dead bees from the SBB to examine them. Many were small and black like the one below.

OK, so here's my first theory. When I put Hyron and Hyron2 together. The bees possibly killed both queens (I now assume both hives actually had a queen). In the melee, many bees were killed. The hive could not go on and the rest of the bees drifted or died. Then along came a tiny wild swarm of small black bees. There's a lot of construction behind the woods at the back of my property. They came in the rain and clung to the hive because it smelled inviting. However, upon checking on the premises, they found dead bees and mayhem and they gave up. They died too.

And my second theory is: One queen survived the melee of the combination, but the rest of the hive did not forgive her for the combination. It's sad but the bees often blame the queen when she had nothing to do with it. So the bees under the landing board were balling the remaining queen - "Off with her head," as it were, so that they didn't honor her leadership any more.

Either way or whatever way, the hive was doomed and is a dead hive. 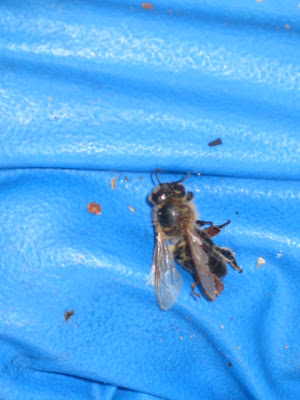 So Devorah has hopefully a new queen, Persephone and Melissa have successfully merged - Two down, but the third attempt to rescue my third problem-laden hive is a wash.