Off Topic Moment: I finished the 3 Day 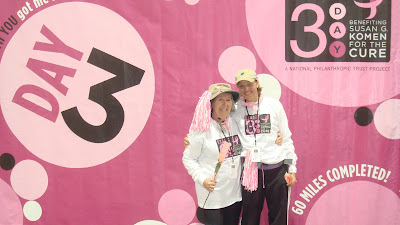 I took time away from the bees this weekend to walk the Atlanta Breast Cancer 3 Day. We walked 60 miles in three days to raise money for the Susan G. Komen for the Cure and the National Philanthropic Foundation for Breast Cancer. There were 3000 walkers on the Atlanta walk.

The Atlanta walk raised $8.3 million - can you believe it! Of that, 15% goes to pay for the walk events and the rest to the National Philanthropic Trust and Susan G. Komen for the Cure.

The walk was an unbelievable experience. It was a combination of endurance and an adventure in many forms. The cold, wet rain for the first 24 hours was difficult. Lisa, my walking partner, lent me a thicker poncho than the one I had, which made all the difference. We were still cold and wet all day and the wet feet resulted in hot spots and later blisters that plagued me for the rest of the walk. I had trained well, so I didn't find the amount of walking difficult until Day 3. I didn't do any cross training - which I really regretted - because I had pain between my shoulder blades for the last two days from carrying the fanny pack, I guess.

Our spirits were lifted at every corner and at frequent intervals by the crew, all of whom dressed up in completely outrageous costumes. They reminded me of Atlanta's Seed and Feed Marching Band. I saw more wild bras than I have ever seen in my life - all worn outside the shirt! There were loud boom boxes playing from the motorcycles that the street "cops" drove (there were real cops too, but the crew were the best - they danced us across each street). Vans decorated for the occasion drove up and down the course with riders yelling encouragement through speakers. Spectators showed up in high spirits as well - dressed up and carrying posters - my favorite was one that said "Save Second Base!"

The pit stops, the lunch breaks and all the meals had themes. Our favorite pit stop was "The Fifties," playing rock and roll music and fully equipped with hula hoops! Our favorite dinner was Saturday night Mardi Bra - the crew was laugh-out-loud funny. All the people serving dinner wore exterior bras decorated with tassels and Mardi Gras beads.

Because it rained all day and all night on Friday, we slept the first night in an abandoned building. That sounds awful but it was a building that had housed some kind of technology business that had gone under so there were carpets on the floors and lights and warmth. They had marked the carpet with tape to designate each person's sleeping area, but it became a mass of sleeping bags and bodies in the middle of the night despite "fire lanes" marked on the floor as traffic areas. On Saturday we slept in a field of pink tents. 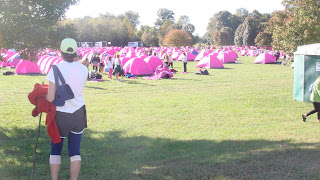 On both nights we took showers in 18 wheeler trucks - group showers like Japan - you got naked in public but unlike Japan, the showers did have individual curtained stalls!

The second two days were gorgeous. We were "OTP" (Outside the Perimeter, as it is known in Atlanta) for the first two days so Lisa and I, both of whom are "ITP" (Inside the Perimeter) people, were in foreign lands. We never knew exactly where we were...it just all looked like the woodsy suburbs. We did cross the Chattahoochee River several times and walked through the downtown area of Peachtree Corners. On Day Three, we walked into downtown Atlanta, so it was much more familiar and gave us a better sense of how much further we had to go. Heart Attack Hill toward Piedmont Hospital was broken up by a Pit Stop...which helped. The best treat of Day Three was that we had our lunch break in Piedmont Park, which is currently off limits to big events.

I am so happy to have been one of the 3000 Atlanta walkers and to have finished each step of the walk, despite a few minor obstacles. Thank you to all of my fabulous family and friends who supported me.

I'm limping around today, the result of blisters and a sore ankle, but it feels great to have walked every step of the Atlanta Three Day.

Email ThisBlogThis!Share to TwitterShare to FacebookShare to Pinterest
at 6:58 PM