Jerry Wallace is one of the beekeepers I most respect in our bee club. He and I compete on wax blocks and with our honey each year at the annual honey contest. Last year he and I gave a program together on how to harvest honey. He's wise and makes informed decisions about his beekeeping.

So we were lucky to hear him on February 11 (I'm late posting this) go through a calendar of the beekeeping year in Georgia and hear how he thinks about his bees each month. 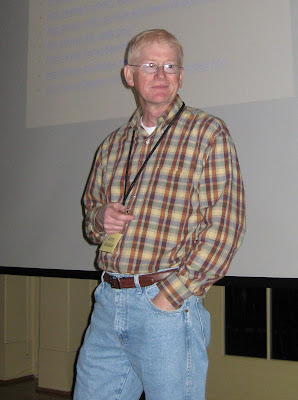 Some things he shared that spoke to me:

Often on beekeeping forums people ask the fun question: What do you keep in your tool box. Jerry provided us with his list of his beekeeping tools:

The tool seen above and below is an actual tool. It's sold by Dadant and others. Dadant calls it a frame cleaner.

Jerry uses it to clean out the groove in the frame - a real boon if you are using starter strips as I do. 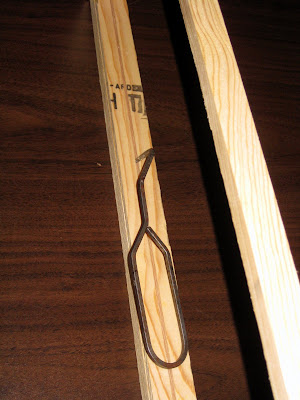 Jerry also provided us with a list of websites he finds useful as beekeeping resources. Here they are:

His calendar for Georgia:
Check the cluster and feed the bees on days with temps above 60
Repair and paint equipment Open hives to look at the brood pattern
Mid February feed 1:1 sugar syrup to encourage brood rearing Make splits
Get swarms - usually these begin with the first day of spring
Equalize colonies
Set out swarm lure hives
Check the queen's laying patterns
Probably need to add a box at the end of March
Showed a diagram of Walt Wright's swarm management configuration The honey flow begins in Georgia
Add supers as needed - one at a time for undrawn foundation, all at once if drawn comb First three weeks are the best honey production weeks in Georgia
First week in May is the best week to produce comb honey Nectar flow ends in Georgia, although some great dark honey sometimes comes in at the end of June and into July
When bees are on the purple coneflower, we're at the end of the flow in Georgia
The best hives have 8 - 10 frames of bees going into the winter.