My bee hives in the snow last Friday ago

If we get snow in Atlanta, it rarely sticks. The major snows here in the 30 years I've lived here are mostly in March and late February....a freakish cold snap as spring is beginning.

Out of character for Atlanta, we had a major snow last Friday. It wasn't deep but it did have a layer of ice under it - which in Atlanta as humid as we are - stops traffic.

Here's what my hives looked like. My friend Diana told me that she knew her hives were alive through the snow because a heated area melted on the tops of her hives (due to the heat generated by the bees inside). My hives didn't accumulate that much snow and what was there didn't melt in any unique or significant way. (Can you tell I'm jealous of Diana's photo opp - and BTW, she didn't take a picture of it!) 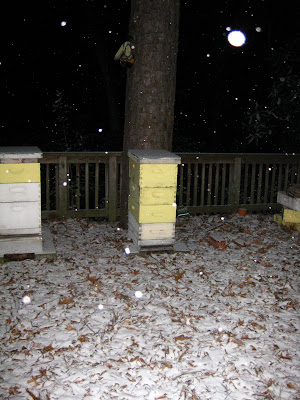 Obviously there's no flying from these hives. The temperature remained in the teens and 20s all week, so I worried about my bees. It's around this time of year that the bees sometimes get fooled by Mother Nature. They have experienced some warmer days; the red maple is actually already blooming; and they start thinking spring is here when it isn't. So hives that have made it through the winter until now may suddenly be dead of starvation. 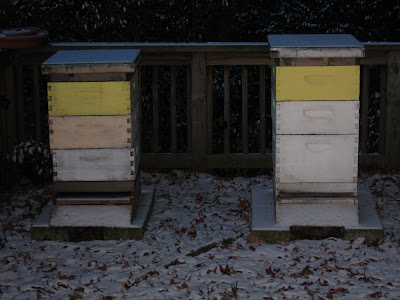 I'm too scared to put my ear to the side of the hive. I wish I were brave enough but I don't want to find out that a hive has died.