Analyzing the Dead Hive - Why did they die?

This hive died with two full boxes of stored syrup. There were about 30 bees head down in a frame but the rest were dead all over the hive. Most of the bodies are on the slatted rack and screened bottom board.

If you look carefully at these pictures, you'll see lots of dead hive beetles in with the bees. The SHBs can't stay alive without the heat from the bees.

You'll also see that most of the dead bees have their proboscis (their tongue) sticking out. Bees do this in starvation, but seeing them on the bottom board with their tongues out seems strange to me. Also a number of these bees have varroa mites on their bodies. I don't know if they are dead from a varroa vectored problem or from starvation or did they freeze to death?

Note: beneath the screened bottom board is the tray from the Freeman beetle trap - lots of dead beetles there too. However the hive is not destroyed by the beetle....there are just a lot of bodies around.

I sifted through the bodies and did not find a queen. That doesn't mean she wasn't there - I just didn't find her. Although this hive may have died because they were queenless. There are a lot of dead bees between the frames front edge and the front wall of the hive box and I didn't go through those. 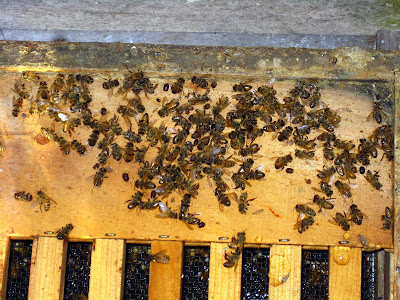 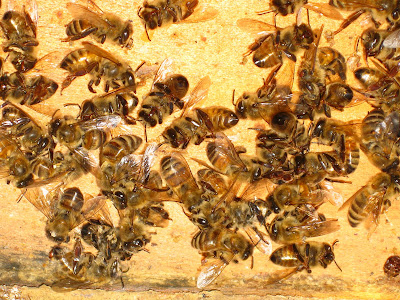 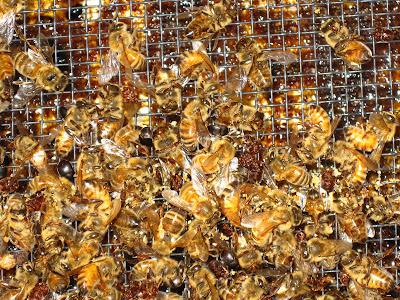 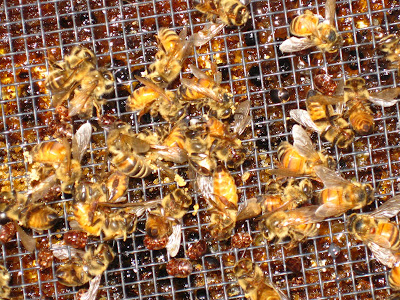