When bees reach foraging in their development (around 3 weeks old), they have to orient to the hive in order to leave it. This way when they start for home after a nectar-collecting flight, they know where home is. At the end of a day usually around 3:30 or 4:30 in the afternoon, bee hives are all a-buzz as the new foragers fly out for orientation.

They fly out of the entrance, up into the air about a foot, turn and observe the hive. They do this over and over until they "get" the location and the cues they need to find home again.

If you move a beehive, you should move it at least 3 miles as the crow flies from their old location to assure that the bees who leave to forage don't return to the old (now empty) location. The bees we moved last night lived about 2.5 miles as the crow (or the bee) flies from my house. It's possible that they will fly back to their original location, so I wanted to get them to orient to their new home.

Well, I've uploaded a video I made with my camera onto YouTube....it's perfectly in focus on my home computer and not great at all here, but FWIW, here is a video of the bees in orientation flying.

One way to do that is to put distracting unusual things at the hive entrance such as sticks and leaves. You don't block the entrance, but you do throw a few things on the front porch. After a day or two the bees will all be re-oriented and they will move the sticks and debris off the porch as a housecleaning chore.

This was the angriest hive of the three last night when we moved the bees, so before I removed the screen wire from the entrance, I gathered some sticks and grass to use on the entry-way. 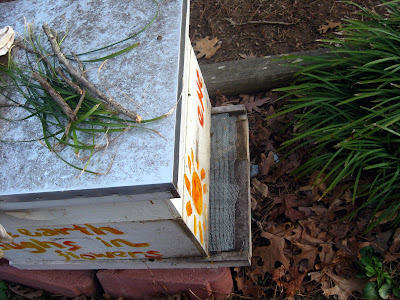 Jacketed and gloved (these were angry bees) I gingerly pulled out the screen wire blocking their entrance. I was glad I had already gathered the debris. I quickly set it on the entry as bees poured out into the 45 degree air. 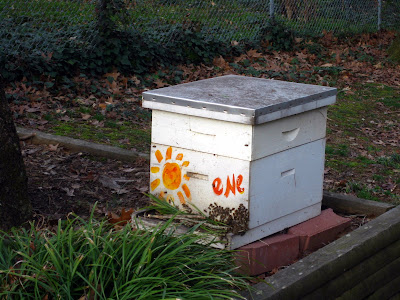 Reassuringly, I almost immediately saw the bees begin to orient, flying out and up and observing their new location. (It was too cold for most bees to fly, but they were doing it anyway.) A few bees head-bumped my veil and a few landed on my shoulders and arms, but for the most part they gathered at the entrance and tried to regroup. 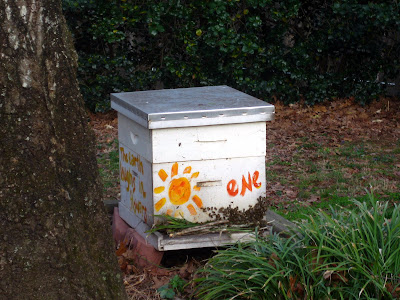 It's interesting that they are gathering on that one side of the entry. Maybe there is less debris on that part of the entry and maybe the queen will be working mainly on that side of the hive. I'll open the hive next weekend to see what's what. I plan to give them new boxes in case there is any disease, wax moth eggs, etc. in the old neglected boxes, and set them up to think of moving to north Georgia (another move, I hate to tell them) in a couple of weeks.

Preview of coming attractions: Next Saturday at 8 AM, I will be picking up a nuc for Blue Heron from Jennifer Berry at her apiary in Good Hope, Georgia.

Email ThisBlogThis!Share to TwitterShare to FacebookShare to Pinterest
at 9:04 AM
Labels: moving hive, orientation