Swarming - the Reproduction of the Hive 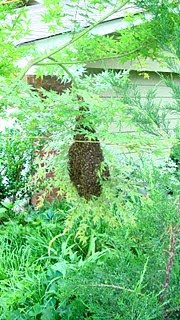 Swarm season is about to be upon us here in Atlanta.  I've been reading about swarms and swarm action in the hive in the Winston book.  Here are some interesting facts about swarming:

Environmental cues that contribute to swarm preparation in the hive:
Inside the hive the cues that contribute to swarm preparation are:
Queen cups are built as a sort of insurance policy so that they could be quickly filled with an egg and royal jelly should the factors for swarming begin to increase.  Previous to swarming the queen lays 20 or more eggs in queen cups - this ensures that the hive will have a queen when the old queen leaves with the swarm.  Colonies seal 15 - 25 queen cells before swarming!

Usually the swarm takes place on the day of or the day after sealing the first queen cell.

Note:  in traditional beekeeping practices, the beekeeper "cuts" queen cells.  The teaching is that cutting the queen cells keeps the hive from swarming.  Let's think about this.

The hive is going to swarm when the first queen cell is capped.  The bees themselves sometimes destroy queen cells to delay swarming.  They do this during bad weather or when the nectar flow has stopped so that the swarm won't leave in less than optimal conditions.

Since it works for the bees, beekeepers often try to prevent swarming in the same way, but we are not privy to hive decision making.  The beekeeper opens the hive and says, "Oh, dear, I must cut out those queen cells."  And with one decision, the hive may be rendered queenless because the old queen has left/is leaving with the swarm.

Hmmmmm.  I don't think I will be cutting queen cells.

Another possibility upon finding swarm cells in the hive is to take a frame with queen cells on it and use it to make a split a la Michael Bush.  Maybe this is the way I'll choose to go when I find swarm queen cells in my hives this year.
Email ThisBlogThis!Share to TwitterShare to FacebookShare to Pinterest
at 11:53 PM
Labels: queen cell, swarm