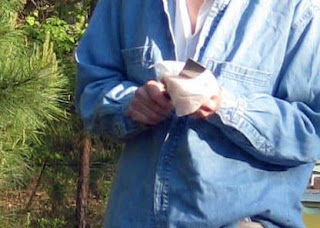 Jennifer's hive tool at the Queenery was an inspiration.  As she walks toward us, she is cleaning this already pristine hive tool.

I have recently read that a USDA survey showed that 30% of honey packed by beekeepers had spores for AFB in it and that 100% of commercial-packed honey had spores for AFB.  One simple way to address contaminating hives is to clean your hive tool between hives.  Jennifer is using a wipe in the picture above.  I've also read that the hive tool can be heat cleaned between hives.

In shame and embarrassment, I present the before picture of my hive tool below.  It is gunked with propolis and other debris.  And I pick it up and casually use it moving from one hive to the next without thought.  No more will I be behaving in such an irresponsible way. 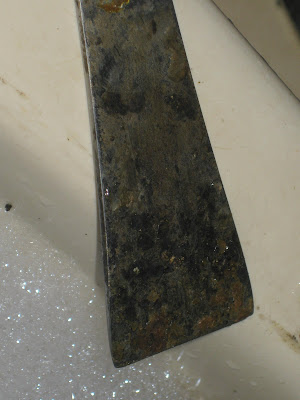 You can see the soapy water below the gunky tool.  Today I gave all of my hive tools a good washing and then went after each of them with the brass bristled brush. 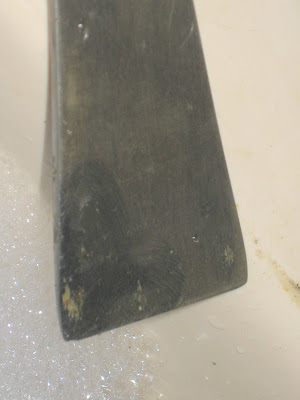 I've pulled some Clorox wipes to take on the Blue Heron hive inspection tomorrow (we want to teach these new beekeepers how to do it better than I've been doing it.). 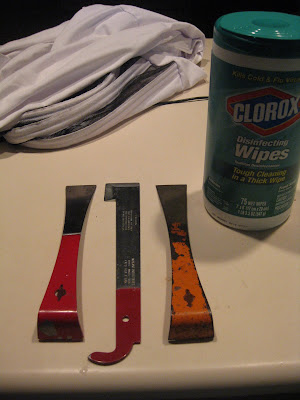 The hive tool on the right is five years old.  The one on the left is a little over a year old (Brushy Mountain gave those away in 2008 or 2009, I believe).  The one in the middle I don't really like and have only used once or twice, so it was a picnic to clean! 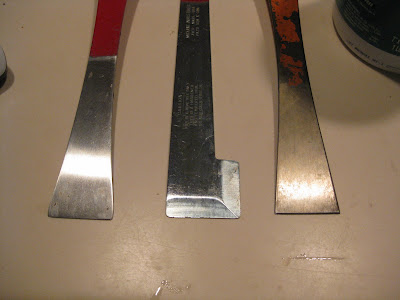 So I'm ready to stop potentially spreading disease and get down to healthy beekeeper practices.