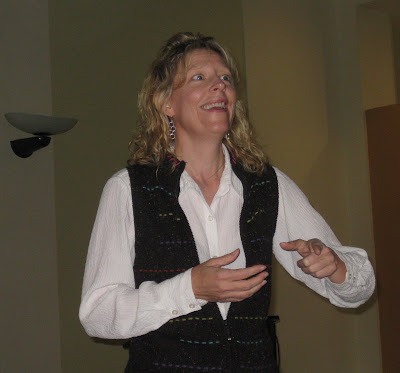 Tonight we were privileged to hear Jennifer Berry speak on IPM management of the varroa mite. It's always fun when Jennifer comes to speak both because she is so entertaining and is so full of good information.

First she talked about the Varroa mite and how it reproduces. As most of you probably know, the mite enters the cell just before the cell with the larvae is capped (on about the seventh day). Within the cell, the foundress mite lays her first egg, a male, and then follows with female eggs. She has 13 days in a worker cell to procreate effectively. She has 16 days in a drone cell, so the varroa mite prefers the drone cell.

Jennifer first discussed the ways varroa has been addressed chemically. Beekeepers used a chemical approach, first with apistan (fluvalinate) and later with coumaphos. With the Apistan, mites quickly developed a resistance to the chemical. With coumaphos there were many issues including bad queens who laid poor brood patterns and didn't live long. She had slides from studies showing that drones survived better in hives with no chemicals and that queens had better, more long lasting reproduction with no chemicals.

Thus, we use integrated pest management or IPM, as it is known in the bee world. There are four main IPM approaches: biological, cultural, genetic and chemical.

The biological approach has not worked with the varroa mite. The idea would be to develop a fungus that kills the mite but it has not been efficacious to follow this approach.

The second approach is the cultural one. This includes screened bottom boards, drone brood trapping, powdered sugar shakes, and brood cycle disruption.
The third approach is the genetic one.  Jennifer encouraged us to buy good queens from breeders who are breeding for hygienic behavior, especially when it comes to varroa mites.  (Varroa Sensitive Hygienic queens are those who breed for hygiene that includes clearing out cells in which varroa lives).

The final approach is chemical.  Jennifer pointed out that she doesn't use Coumaphos or Fluvalinate.  There are a few chemicals that are essential oils with a thymol base that she would consider using.  Jennifer also talked about oxalic acid which is WOOD BLEACH.  She asked would you want that in your hives with your bees?  She also felt similarly about formic acid which is caustic, corrosive to equipment, dangerous for human's eyes, lungs, etc. and hard on bees and brood.  She was not in any way positive about the use of these caustic substances.

Part of IPM includes understanding the economic threshold.  IPM recognizes that there are pests in the hive and rather than focus on eliminating the pest, the IPM approach is about recognizing when the level of pest in the hive is above a manageable level to a point called the Economic Injury Level, where the hive will be harmed because of the presence of the pest.

Jennifer suggested that at this time of year in general a mite drop in 24 hours of 60 mites or 125 in a larger, more thriving colony, is at the economic threshold.  If your colony measures at that drop level, then you need to do something such as one of the previously mentioned IPM approaches.

In the UGA bee lab, Jennifer is now doing research on the effectiveness of powdered sugar shakes, looking at the timing (doing them before the queen starts laying brood for spring) and the delivery method(top down or bottom up - blowing sugar into the hive from the bottom).

Julia and I left the meeting and decided to put a sticky board under one of the Blue Heron hives with the plan of looking at it on Sunday at our Metro Hive Inspection.